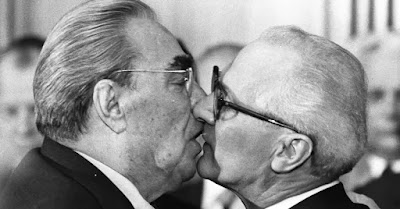 Friends, you guessed it -- that's the iconic kiss between Soviet leader Leonid Brezhnev and East German President Erich Honecker in 1979.  It's symbolic of the awkward embrace between the USSR and East Germany, which took its most tangible and historically ominous form in their joint membership in the Warsaw Pact, a military alliance that rivaled our NATO.  Well, in today's Newsmaker Show, Brian and I tackle the termination of the Warsaw Pact in March 1991, along with many other intriguing historical developments, including: the construction of the Eiffel Tower, Spain's expulsion of the Jews in 1492 and the history of European anti-Semitism, the reign of Oliver Cromwell in England, the long battle over Irish "home rule" and the future of Northern Ireland in the age of Brexit, and the extent of public support for Britain's (socialized) "National Health Service".

Believe it or not, we also tackle some current events, including: China's deceptive PR on green energy, the threat China poses to its neighbors, and the notable constancy in US-China and US-Russia relations, despite occasionally hot political rhetoric.  We also discuss Cuomo's ongoing travails with women accusing him of inappropriate behavior, and his wily survival strategy.

Man, oh man!  What a lineup.  Only a crazy person wouldn't listen to such an informative show, am I right???

In other news, bankruptcy gets a little closer every day!

And, in case you had any doubt, even the WaPo agrees that Biden's claims about Georgia's election integrity reforms are bogus:

Great news!  There will be soon be a lot more potheads in New York State!  In other words, Cuomo's reelection committee is about to get a big shot in the arm.  Meanwhile, the mayor of my hometown, Rochester, New York, is proposing that marijuana revenues be used to fund reparations.  Man, we truly do live in the best of all possible worlds...

We could soon see the reemergence of Trump rallies!  That would be a huge relief to CNN and MSNBC, which have missed Trump (hatred) terribly.  Heaven knows nobody's tuning in to watch Biden mumble his way through a speech.

In its ongoing effort to embody the spirit of Big Brother, Facebook won't allow anything "in the voice of Trump" on its platform(s).  What a mockery of democracy and free speech!  FB ought to be ashamed.

Finally, you'll be pleased to learn that the flag of transgenderism is flying proudly over the White House!  Really, though, shouldn't there be separate flags for L, and G, and B, and T, and Q, and...whatever else the Left is celebrating these days?  In addition, surely we can't forget the BLM flag, and there ought to be a flag to fete Asians as well (just, for the love of all that's holy, don't make it yellow!).  Oy.  When will the virtue signalling stop???