It's Official: The Left's Cuomogasm Is OVER! 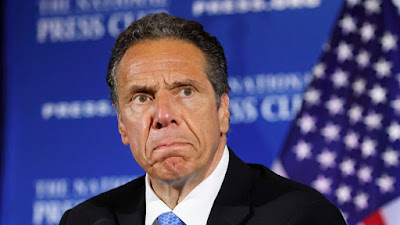 Friends, these are tough times to sport the last name "Cuomo".  After being feted by the press and by people-in-the-know for most of 2020, Andy is now hanging on for dear life.  Interesting wrinkle, though: New Yorkers are hardly unanimous in demanding his resignation.  Cuomo's enemies may have to sustain a long siege of Albany if they want to browbeat "America's Governor" into retirement.

Linda brought to my attention the outrageous and thoroughly unprofessional attacks that senior members of the U.S. military are mounting against Tucker Carlson.  Now Ted Cruz is taking up Tucker's cause.  Actually, it's not Tucker's so much as America's.  Whatever you might think about Tucker Carlson, we simply cannot have the military taking sides in political debates.  We're flirting with banana republicanism here, folks!

You won't be shocked to hear that fewer young Americans are going to college these days.  After all, dorms have become holding cells, and classes are hardly ever being offered in the classroom.  The question is: will recent enrollment declines be sustained even after COVID recedes?  There's reason to think they might.  The practical value of a college education is not what it once was, and the expense has skyrocketed.  Of course, since the Dems are throwing money at higher ed, it may not matter.  Who needs students when you've got federal subsidies?

Things are getting interesting in the Golden State, where Yours Truly was born in the Year of Our Lord 1974.  Governor Newsom will almost certainly be subject to a recall election, and polls indicate that it could be a close contest.  The national and even the state GOP have so far put virtually no resources into this effort, but sooner or later Republicans will have to decide whether to go all-out in an attempt to win back control of the Governor's mansion in Sacramento.  Maybe Arnie would like to reoccupy it?  He wouldn't be my first choice, ideologically speaking, but I wouldn't say "Hasta la vista, baby" to his face, either.