Drive a Stake through Obamacare's Heart! 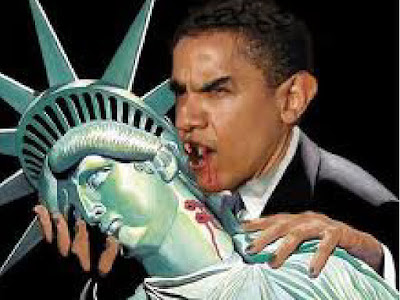 Greetings!  As you know, the Senate is still struggling to find a way to keep Republicans' promise to the nation...that they would end Obamacare and (eventually) replace it with something better.  Let's hope they can make it happen.

Here is my latest article, which should be appearing soon in a newspaper near you, and has already appeared in American Greatness...  Thanks to American Greatness for providing another outstanding platform for my conservative commentary.  :)

The article follows the logic of my previous post, more or less.  I hope you enjoy it, and I hope you encourage your Congressman and Senators to vote to end Obamacare and pursue real fixes to our broken health care system.  If you ask me, time is running out.  Our health care fiasco will bankrupt us, if we're not able to change course.

Posted by Nicholas Waddy at 5:15 AM No comments:

Hi again, friends!  I apologize for not posting in a while.  Being on vacation is hard work!

First, it's likely to work.  Republicans can all agree that Obamacare is bad and should be repealed.  So get on with it!  Decisions about what to replace it with can wait until later.  Let the repeal take effect years from now, if needed.

Second, the chief reason Democrats won't participate in repealing and replacing Obamacare is that they would prefer to keep it.  The second Obamacare is repealed, though, their calculus has to change.  They can participate in replacing it, or they can watch it disappear altogether.  Presumably, some Democrats will see the wisdom of being part of the conversation on replacing Obamacare, once replacement becomes an inevitability.  That way, at least they can get some of what they want, instead of none of it.

Last, the alternative to repealing now and replacing later, at this stage, is presumably embarrassment, failure, and self-flagellation for Republicans.  This is unacceptable.  Republicans were elected to lead the country.  They need to demonstrate a capacity to do so.  Weakness only begets weakness.  Thus, we have no choice but to repeal AND replace Obamacare, no matter how long it takes, and no matter the machinations that get us there.  The left has been quite effective in slowing down Republicans, and the Trump administration, with judicial chicanery, and with phony stories about Russia and personal attacks against everyone with the last name of Trump.  They want, no doubt, to get as many Republicans as possible "off the reservation," so that it is impossible for conservatives to govern.  We can't let them succeed!  Push on, I say.  Get it done.

For all these reasons, I support President Trump's call to repeal Obamacare NOW, and replace it later.  I hope you will too.
Posted by Nicholas Waddy at 6:00 PM No comments:

North Korea is On Notice!

Good news!  The Daily Caller picked up my article on North Korea.  Will President Trump pay heed?  Frankly, it's hard to imagine that any more patience could possibly bear fruit, but of course the President knows much more about the situation than you or I...

Here's a link to the article in The Daily Caller:

The Moment of Truth 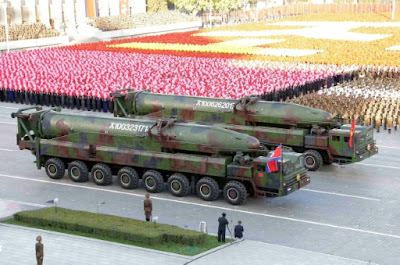 Friends, if you're like me you've been pondering the mess we're in with North Korea for a long time.  It's by no means easy to figure out what we should do, because, whatever option we choose, it could (literally) blow up in our face.  Nevertheless, I believe the time for action has arrived -- military action, if needs be.  Here is my latest article (the long version).  See what you think, and I welcome your comments and/or criticisms.

Time's Up for North Korea

For decades, North Korea's hardline communist regime has flouted international norms and international law, threatened its perceived enemies with terrible violence, violated the sovereignty and territorial integrity of its neighbors, kidnapped and assassinated foreign nationals, engaged in a wide range of criminal activities, and built up its military, including nuclear weapons and missile programs, in violation of U.N. resolutions and the Nuclear Non-Proliferation Treaty. The North Korean leader, Kim Jong-un, who embodies this national tradition of iconoclasm and provocation, has repeatedly taunted the United States, reveling in the possibility of turning U.S. cities to “ashes” with his nuclear weapons.


Recent pressure from China, which has been encouraging North Korea to abandon its confrontational tone, as well as its nuclear and missile tests, seemly has achieved nothing. The North Koreans are as belligerent as ever, and their first test of an intercontinental ballistic missile, conducted on July 4th (so as to cause maximum annoyance for the United States), confirms that they are nowhere near backing down.


And why should they? For decades, North Korea has thumbed its nose at the entire world, and the response has been tepid, at best. In 2010, North Korea sank a South Korean warship, and South Korea protested but took no meaningful action. The U.S. reacted with similar restraint when the U.S.S. Pueblo was seized in 1968. Over the years, North Korea's nuclear program has invited condemnation and a progressive tightening of sanctions, but for a country that enjoys attention, even negative attention, and which engages in stunningly little trade with other nations, these measures are more a demonstration of international impotence than they are an effective set of countermeasures. President Obama addressed this impasse with a fruitless, toothless policy of “strategic patience,” which only emboldened the North Koreans, and led them to escalate their rhetoric and their military buildup.


This is the mess that the United States finds itself in, and which President Trump must somehow resolve. Acceptance of a nuclear-armed North Korea, with the capacity to strike against U.S. cities, is an unacceptable outcome, because Kim Jong-un's rationality is in doubt, and his glee at the prospect of vaporizing American cities and their inhabitants is palpable. The Soviets, by contrast, may have been ruthless, but they were never reckless. One way or another, therefore, North Korea must be disarmed of its nuclear weapons and its long-range missiles. Since there is little prospect of achieving these goals by continued posturing and issuance of sanctions, there are only two ways that President Trump can make the world safe from North Korea.


The most desirable outcome would be one that disarms North Korea peacefully. The only way that this can be done under present circumstances is by delivering an ultimatum to Kim Jong-un. For instance, President Trump could demand that within 30 days North Korea will decommission its nuclear reactor, hand over its nuclear weapons, welcome U.N. nuclear inspectors, cease all work on long-range missiles, etc. in return for prompt negotiations on a peace treaty to end the state of war that still technically exists on the Korean Peninsula. In effect, we would be proposing to legitimize and accept the Stalinist regime in Pyongyang in exchange for enfeebling it militarily. My guess is that such an ultimatum would only work if it was accompanied by dire threats to use massive military force against North Korea if it refused to cooperate.


The second course of action that could result in the removal of the North Korean threat involves direct military action. North Korea could be blockaded as a preliminary step, but ultimately its nuclear and missile development facilities, nuclear reactor, missile launching sites, etc. would probably have to be destroyed by bombing. To suppress their conventional retaliatory capabilities, North Korea's air defenses and its artillery forces might also have to be targeted on a large scale. The best case scenario would then be one in which the North Koreans quickly realize that they have bitten off more than they can chew, and to save their own skins they accept the demands of the international community. They might even overthrow Kim Jong-un and choose more responsible leadership. The worst case scenario, however, would be one in which North Korea retaliates against U.S. forces in the region, and probably against civilians in South Korea and Japan. Although there would be no question of North Korea prevailing in the ensuing conflict, and in my opinion very little possibility of Chinese intervention, casualties could be high.


Understandably, many in the U.S. and throughout the world are advising caution, given the high stakes involved. The problem, though, is that caution and forbearance have been the basis for policy towards North Korea for several generations, and the North Koreans have gotten the message, loud and clear, that they can do anything, to anyone, and get away with it. President Trump faces such a difficult challenge in North Korea precisely because previous U.S. and world leaders have been unwilling to accept the risks of confrontation. Now we have no choice.


President Trump: avoid unnecessary bloodshed if you can, but above all face down the North Koreans and eliminate the threat that they pose once and for all. The alternative could be as apocalyptic as the darkest fantasies that dart through the warped mind of Kim Jong-un.
Posted by Nicholas Waddy at 12:58 PM No comments:


Not surprisingly, The Daily Caller jumped all over my latest article on the Trump travel ban.  Here it is.  Enjoy!