Finally! The Left Clarifies Its Position: Sexual Assault Laws Should Apply to ALL Mammals 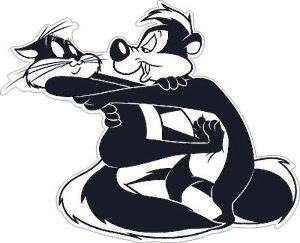 Friends, no doubt you've been asking yourself: can a giraffe be racist?  Can a lemur be homophobic?  Can a skunk commit sexual assault?  Of course, the answer to all these questions is an emphatic: HELL YES!  The Left is determined to protect us from all real and potential violations of our sacred human rights.  Uh, scratch that.  Mammalian rights.  Moreover, violations of wokeness shall be punished with severity no matter the species of creature involved.  Case in point: Pepe Le Pew, the world's most famous skunk, and a Looney Tunes character famous for his, hmm, "aggressive" pursuit of his beloved Penelope (a kitty cat), is now being added to the ever-growing list of CANCELLED cultural icons.  Thank heavens!  I was considering getting fresh with a feline myself, but now that the Paragons of Virtue have sounded off on the issue, I'll leave Princess Puss-Puss well enough alone.

The dangers posed by Critical Race Theory and cancel culture are naturally concentrating the attention of a great many conservatives these days.  That's as it should be, because these ideas threaten to drive us permanently from the mainstream -- in fact, that's their point.  Check out these articles that lay out the stakes, and discuss how we can rally to the colors of Western Civilization while there's still time.

You ain't seen nothin' yet -- at the border, that is.  The Biden administration is making it increasingly clear: if you're under 18, or you show up at the border with anyone else under 18, you're going to be released into the general population of the United States.  As this settles in amongst the world's poor, you better believe the numbers flooding across the southern border are going to spike, and far more than they already have.  Get your spare bedroom ready, folks!  It's going to be occupied soon, whether you like it or not.

Well, we saw the writing on the wall several weeks ago, I think.  The Biden COVID "Relief" Package is going to become law, and thus we're $2 trillion closer to bankruptcy.  Yay!  What's more alarming is that the Dems still haven't given up on scrapping the filibuster and passing everything else on their progressive wish list: from the "Equality Act", to election reform (i.e. fraud expansion), to infrastructure spending, to gun control.  Senator Manchin isn't 100% reliable on these issues either.  Remember, he said he wouldn't support a COVID Relief Bill that wasn't bipartisan.  How long did that position last?  Surrendering the White House to Biden was bad enough.  Letting the Dems pass any legislation they please through Congress would be MUCH, MUCH worse.  Our only hope then would be that SCOTUS would nix the worst of these new laws.  Friends, my advice: write to Senators Manchin and Sinema.  Give them the courage of their convictions, and encourage them to uphold the filibuster.  Our country's future may depend on it.

It's official: Lisa Murkowski will have some big guns pointed at her when she runs for reelection in 2022.  I'm speaking metaphorically, of course.  President Trump has announced that he will campaign for whomever emerges as the bonafide conservative challenger to Murkowski.  I say: let 'er have both barrels, Mr. President!  We can surely do better.

More proof that "anti-racists" don't have a sense of humor:

And a hearty bon voyage to Nigel Farage, who is retiring from elective politics on a high note, having helped Britain win its independence from the European Union.  So far, I'd say Brexit has been a resounding success, although in the thick haze created by COVID it's a little hard to tell.

This one is interesting: DJT is asking the Republican Party and its fundraising arms to "cease and desist" from using his name to drum up donations.  More accurately, he's asking that the GOP seek his permission before trading on his name.  That's fair enough.  It's clear that there will be a grand battle for the heart and soul of the Republican Party, after all, and Trump wants to play a part in it.  The least we can grant him is ownership and authorship re: his own voice.

Is Mitch McConnell thinking about throwing in the towel?  Not necessarily, but he is considering how his successor will be chosen in Kentucky.  That's good.  We need all hands on deck in the U.S. Senate, so the last thing we would want is Kentucky's Democratic Governor choosing a McConnell stand-in.

Lastly, perhaps you, like me, assumed that Mike Pence was toast in the GOP.  Well, Trump himself seems to think otherwise.  Jason Miller claims that Pence is still the odds-on favorite to be Trump's running mate in 2024.  I dunno if I agree with Trump's logic, but at any rate it would be silly to dismiss Pence out of hand.  He could still be our V.P. selection in 2024, or even our presidential nominee.  He wouldn't be my first choice, but there can be no doubt that he'd be a huge improvement on Sleepy Joe.  That's a low bar, admittedly.

Posted by Nicholas Waddy at 5:15 PM