Look Out! It's a White Guy! 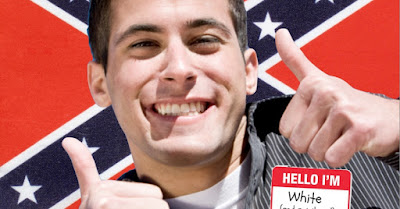 Friends, if there's one thing that the mainstream media has taught us, it's that white males are all that's wrong with America: we're racist, we're sexist, we're homophobic, we're Republicans, we're conservatives, we're Trumpers, and, to make matters worse, we're responsible for all the violence in this country -- or, at least, all the violence that's worthy of reporting.  No wonder people hate us!  This article exposes how empty and silly part of this narrative is: whites simply aren't responsible for even a proportionate amount of violence in this country.  We're remarkable only for our quiescence, in fact.

In other news, "President" Biden held a press conference!  I listened to a small part of it.  Sure, he's a national disgrace, but I found it interesting that at least the press was, uh, pressing him on a few points.  They seem to have forgotten about COVID -- Sleepy Joe's got that licked -- but the border crisis is finally on the MSM's radar, and they don't like how little access they're getting to migrant facilities.  Good for them!  Do your job for a change, you hacks!

Biden says he plans to run again in 2024.  Can you imagine?  Soon these press conferences will feature smelling salts and a fainting couch...

Polls differ with respect to Biden's approval rating, of course, but most agree that it's headed down.  That's what you would expect, after all.  The honeymoon period is ending.  My take: without rising approval numbers, Biden's chances of strong-arming his radical agenda through the Senate grow dimmer and dimmer.

And even if Biden does tame the Senate, he'll have to contend with a federal judiciary stacked with Trump appointees.  Can we count on them to uphold the Constitution and stymie Bidenism?  Heck, no.  We can't count on "conservative" judges for anything...but there's always a slight chance that they'll have a good day and slow down the express train to Bolshevism a tad.

Great news for those of you who are card-carrying members of the KKK (which I assume is most of you): Georgia has reinstituted Jim Crow!  About time, right?  Of course, I jest, but the apocalyptic rhetoric coming from the Dems because of Georgia's new election integrity measures really takes the cake...  I mean, Dems, why not compare Georgia Governor Brian Kemp to Super Hitler, while you're at it?

We got an unusual mea culpa from Twitter CEO Jack Dorsey recently: he admits that Twitter's persecution of the New York Post over its reporting on Hunter Biden's laptop was a "mistake".  On the other hand, it was a "mistake" that went on for two weeks, and for which no one was held accountable, and which Twitter reserves the right to repeat, whenever the political interests of the Left demand it.  In other words, the standard for the suppression of tweets is...whatever Twitter says it is, moment to moment.  Of all the Big Tech slimeballs, I think Dorsey might be the King of the Slimeballs.

And here's an article that addresses how we can respond to, and even win a few victories against, wokeness and "cancel culture".  The upshot?  Don't give in!  In fact, give as good as you get.  Make them sweat, for a change.  I couldn't agree more, except for the fact that, sometimes, when you stand and fight, you lose.  On the other hand, when you surrender every time, you lose every time.  Food for thought.

Posted by Nicholas Waddy at 2:20 PM