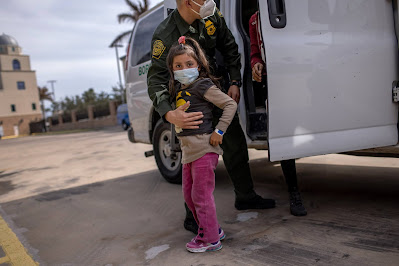 Friends, what's going on at the border is truly alarming, and it's despicable, when you consider the cynicism of the Biden strategy on immigration.  First, keep in mind that Biden has made it clear: if you're under 18, or if the government can't prove that you're over 18, you will be allowed to stay in the United States.  Thus, anyone who is a minor, or who is the parent of a minor, knows that our laws against illegal immigration simply don't apply to them.  That sets up the conditions for a sharp increase in the amount of illegal migration, needless to say.  It also puts migrant children in grave danger, of course: it puts them in the hands of the "coyotes" who smuggle them across the border, who are also often engaged in the drug trade and extreme violence.  It also turns children into a commodity: they are essentially "get into America free cards", which are naturally leveraged by many adult migrants to increase their chances of staying in this country.  What becomes of these children once they are released into the general U.S. population with their parents, or their "parents"?  Who knows -- and little do the Democrats care.  That's because all this illegal immigration also provides Democrats with a critical opportunity.  There's no question that non-citizens vote in our elections.  If the Dems' harebrained election scheme, H.R. 1, passes, then many more will do so.  But even if non-citizens don't vote in sufficient numbers to steal the 2022 and 2024 elections, the Dems have decided that "demographics is destiny": they believe that revolutionizing the ethnic makeup of the U.S. population, and thus, in the long term, of the electorate, will guarantee them permanent political domination.  They're wrong, because Hispanics and Asians (not to mention blacks) are not the progressive automatons that Democrats assume them to be, but their calculations may be sound in the short and medium term.  Look at Georgia: it's domestic and international migration that has transformed it from a red to a purple state.  Look at California: it's immigration that transformed it from a purple to a deep blue state.  Make no mistake, therefore: Democrats may genuinely care about migrant children (ignoring the suffering that their own policies engender), but they also see them as pawns, as tools that they can manipulate to achieve and maintain political control.  We owe it to those children, and to our own, native-born American children, to create a system of immigration based on the rule of law and on the integrity of borders, because ultimately all of us benefit from both.

Anyway, check out this article, which examines Biden's policy dilemma from a "progressive" perspective.  From their point of view, the massive numbers of illegal immigrants don't yet register as a problem, but the "challenges" in providing necessary services to those migrants do.

This article reinforces my view that political opportunism underlies what appears to be rank incompetence in the administration of our border policy:

Here's an eloquent exploration of the link between illegal immigration and rising crime, and the Dems' failure to take either problem seriously.

This one is important, folks.  Although polling on Biden's job performance generally puts him above 50%, if NBC is showing him underwater, that's significant!  Biden is handing out stimulus checks like they were candy, and still the American people are nonplussed.  When the honeymoon is over, it sure looks like Biden won't be a popular president -- sorry, I meant "president".

Remember all those high-handed edicts that emanated from governor's offices and the federal government during the pandemic?  Your business must close.  Your loan payments are suspended.  Your rent is NOT due.  Well, now the courts are beginning to weigh whether the government had any such authority to begin with.  About time!!!

Finally, no one doubts that, in the midst of a pandemic, the government may incur some unusual expenses.  So be it.  However, the amount of spending that has gone on in the last year is completely outrageous and will do serious long-term harm to our nation's fiscal soundness.  There's also been an incredible amount of waste.  As taxpayers, you ought to be indignant!