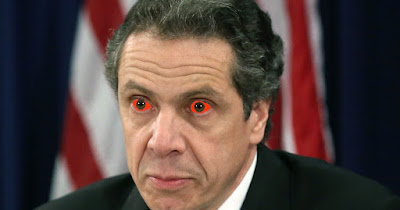 Friends, months ago the media was tripping over itself to lavish compliments on "America's Governor," Andrew Cuomo.  Now, Andy's fair-weather friends in the press, not to mention his erstwhile political allies, are demanding his head on a pike.  Every day is a new adventure, huh?  Well, here at WaddyIsRight we take the long view, and, as you'll see in my latest article, for two very different sets of reasons I hope Governor Cuomo resists all those calls for his resignation.  Read on, and see if you agree...

Keep On Keepin' On, Governor Cuomo

Calls for the resignation of the Empire State's uniquely imperious overlord, Governor Andrew Cuomo, continue to proliferate. For years, conservatives have been groaning under his pedantically progressive (mis)rule. I am no exception. And yet, for both principled and thoroughly partisan reasons, I find myself hoping that Cuomo digs in and refuses to leave.

Why? First, the principle: Cuomo says that calls for his ouster are “anti-democratic”. He reasons that the people of New York chose him as our Governor. Ergo, the people should decide when he leaves office, not journalists, not a Twitter mob, and certainly not Albany insiders.

He has a point. Andrew Cuomo is a terrible Governor and a terrible man. He's also the bonehead that New Yorkers elected as, well, king of the boneheads. Isn't the essence of democracy the idea that the people get to decide such questions?

In addition, the campaign to blacken the name of Andrew Cuomo and compel him to turn tail and flee elective politics is following the same obscene playbook that was deployed against Donald Trump in 2016, against Brett Kavanaugh in 2018, and against countless other (male) politicians and celebrities since the #MeToo movement began. Accusations seem to acquire “credibility” based on their timeliness and their frequency, and only secondarily on their seriousness or the degree of substantiation supporting them. And that, in case anyone remembers or cares, is the antithesis of American justice. We are all, last time I checked, innocent until proven guilty. Even — gulp! — Andrew Cuomo. The fact that no one, even his own mother (I assume), likes him is irrelevant.

Arguably, the charges that Governor Cuomo directed a cover-up of COVID-related nursing home deaths are more serious. I don't prejudge Cuomo's guilt or innocence of those charges...and that is the point, surely. Until proper investigations of Cuomo's actions are completed, it would be premature and irresponsible to call on him to resign in response to allegations which could prove, to borrow a phrase from our friends in the Fourth Estate, “baseless”.

These are all good reasons to hope that Governor Cuomo will have the courage of his convictions and will not allow himself to be bullied out of office. As I mentioned, though, I have a second set of reasons why I am rooting for Cuomo's survival that are, umm, less lofty and more selfish.

Given the controversy that swirls around Andrew Cuomo, and the long list of Democratic politicians who have abandoned “America's Governor” in his hour of need, the fact is that he is now among politics' “walking wounded”. Even that may be an optimistic gloss on his predicament, however. He might be better compared to a gubernatorial zombie, staggering jerkily and mindlessly through a post-apocalyptic landscape filled with hard-boiled adversaries eager to deliver the perfect head shot that will drop him to the tarmac once and for all. That's a florid way of stating the obvious: politically, Andrew Cuomo is a dead man walking.

As a New York Republican, I must say: zombie Cuomo is a beautiful sight! He gives the Empire State GOP hope that in 2022 we might mount a comeback, after many dark years in the political wilderness. Frankly, our state has turned such a deep shade of blue that only a self-destructive, thoroughly obnoxious, and potentially indictable Democratic Governor could breathe new life into New York's Republican Party and its anemic conservative movement. Should Cuomo hang on into 2022, he will at least complicate matters for his fellow Democrats, as they navigate a midterm election season in which one would expect Democrats to struggle anyway, as the party-in-power. The best case scenario for Republicans, however, would be if Cuomo endures in office and wins renomination as his party's candidate for Governor. Then, assuming the New York GOP puts forward a credible candidate, Cuomo could go down like a sack of potatoes. We'd be rid of him forever, and in the most “pro-democratic” way possible.

That's my hope, anyway: that Cuomo maintains his death grip on the Office of the Governor just long enough to drag his party down with him.

There's no question that he should go, but let's send him packing the right way.

In other news, here's a detailed analysis of the Governor's race in New York in 2022, which suddenly looks attainable for Republicans:

It appears that Sleepy Joe's inactivity is beginning to cost him in the eyes of the voters, who assume, in large numbers, that he is "past it".  Duh!

Good news!  Beauty products will no longer advertise their ability to foster a "normal" appearance.  As you've no doubt guessed, "normalcy" is...drum roll please...RACIST!!!  Plus, in an age when our greatest heroes and most treasured role models are crossdressers, surely beauty products ought to be redesigned to create an abnormal appearance anyway, right?  Kudos to Unilever for realizing that beauty is all the in the eye of beholder, and since the beholder is racist, sexist, homophobic, transphobic, and probably even Christian (gasp!), it's high time we cultivated ugliness instead.

Lastly, I realize there's a news blackout of any information about the coronavirus pandemic that would tend to lighten the public's mood, but buried in the headlines is this gem: deaths are way down!  As the vaccines proliferate, and as the most vulnerable are thus protected (at least from the virus itself), we can expect these trends to solidify.  Could, uh, "normalcy" be around the corner???  We shall see.