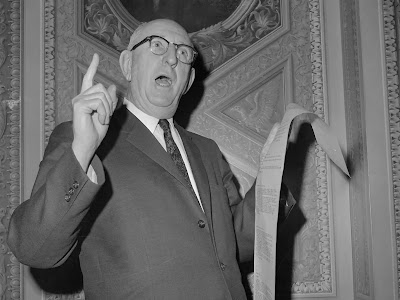 Friends, the filibuster, a venerable Senate tradition, has a long and checkered history.  Its most fervent champions were Democrats who used it to obstruct civil rights bills in the 50s and 60s.  Now Democrats are its most impassioned enemies.  The filibuster requires a degree of bipartisanship in order to advance bills and pass legislation.  The Dems have an ambitious progressive agenda that enjoys virtually no Republican support, however, and they'd like to pass it, thank you very much, and bipartisanship be damned!  There are three obstacles to their plan: Senator Joe Manchin (D-West Virginia), Senator Kyrsten Sinema (D-Arizona), and the U.S. Supreme Court.  Since SCOTUS is unlikely to be determinative, it's really down to those two lonely, "moderate" Dems.  My advice, therefore: write a letter to those two Senators praising their devotion to the ground rules of democracy and their commitment to working across the aisle.  They need support, now more than ever!

That's one of the topics that Brian and I discuss on this week's Newsmaker Show.  We also cover the Cuomo debacle, the Newsom debacle, the Tucker Carlson-Pentagon kerfuffle, the COVID Relief Bill and our looming fiscal calamity, and Mike Pence rising like a phoenix from the ashes.  So, that's two debacles, one kerfuffle, a calamity, and a mythical bird.  You heard it here first!  In addition, in our "This Day in History" segment, we cover the abdication of Nicholas II in March 1917 and the tragedy of the Bolshevik Revolution, the German occupation of Czechoslovakia in March 1939, and the legacy of President Lyndon Johnson's "War on Poverty".

It's a humdinger, folks!  Tune in ASAP!

In other news, "President" Biden is politely asking illegal immigrants to...illegally immigrate later, at a more convenient time.  Whew!  This guy is TOUGH, no?

Biden is also encouraging changes in the nature of the filibuster, although he doesn't (yet) support its abolition.  My prediction: the filibuster will eventually die, but it will be a death of a thousand cuts.

President Trump says he will wait until after the 2022 election to decide whether he's running in 2024.  Why wait, I wonder?  Strategically, I suppose that freezes the rest of the field and keeps Trump in the news.  He's like a modern-day (non-fictional) Hamlet.  It's equally likely that Trump isn't announcing a 2024 run because he hasn't decided yet whether he wants to attempt one.

A Facebook insider is taking credit for Joe Biden's "victory" in 2020, and with good reason: Facebook buried and censored stories prejudicial to Biden, and it registered millions of new (Biden) voters.  If ever there was an argument for breaking up Big Tech, here it is!

Finally, everyone should read this article and consider its arguments carefully.  Are public schools doing more harm to America's children than good?  Would we be better off placing responsibility for education in the hands of parents, rather than bureaucrats?  Is our current socialist model the only viable model for the management of elementary and secondary education?  I would love to hear your thoughts.