Nice Country You Got There. Be a Shame If It Got Ruined. 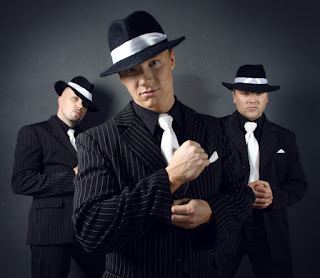 Friends, there are some fascinating books and articles to be written on the topic of how similar government is to organized crime.  Taxes, protection rackets, rules (spoken and unspoken) -- both have them in spades.  And looming behind both is the threat of violence if the will of the president/godfather is defied.  Both also demand "respect", or legitimacy, if you will.  Neither thrives on chaos, per se.  Both promise order, of a sort, but at a price.  Always at a price.

Florida Governor Ron DeSantis is reflecting these days on how the federal government has become a tool for the redistribution of American wealth.  Of course, it's always been that, but now it's being used on an even wider basis to buttress the finances of deep blue areas -- areas that, based on their chronic mismanagement and their willful disavowal of the iron laws of economics during the coronavirus pandemic, find themselves on the verge of bankruptcy.  But Sleepy Joe has the answer ready to hand: federal subsidies, of course!  Uncle Sam to the rescue!  And most Americans seem only too happy to rubber stamp "President" Biden's $1.9 trillion boondoggle (the first of many, we hear).  I mean, why not?  We won't be paying the bill.  It's our hapless children and grandchildren who will get the shaft...and who cares about them?  Surely, they owe it to us.  I mean, we live in the worst of times, right?  Viruses, systemic racism, "Mr." Potato Head, Trumps galore.  If now isn't the time to slather the balm of federal largesse on America's gaping wounds, what is???

And so...back to my main point.  Organized crime and government have one more thing in common: an ingrained habit of diverting money from those who have earned it, by hard work, self-discipline, and careful stewardship, to those who manifestly have not, but who, by virtue of their connections, their brutality, their ambition, or their self-importance, can bully or wheedle their way to power and riches.  There's an even simpler way to view such relationships, of course: it's the dynamic between parasites and their hosts.  Such relationships are common -- in fact, very nearly universal -- in nature, but the key question is always: how much life energy can the parasite suck out of its host, before the host itself is compromised, and both organisms are destroyed?  Well, the federal government has been devouring the wealth (and the liberties) of decent Americans for a long time.  Biden and his pals certainly didn't invent that game, that rampant parasitism, but they do seem determined to push it to its logical conclusion -- to test the limits of the free market and of American strength and thus to find out exactly how much freeloading a seemingly healthy economy and society can take.  It's an experiment, if you will, and we are all, whether we know it or not, Biden's lab rats.  Don't like being poked and prodded?  Don't like having tens of thousands of dollars borrowed in your name and spent on heaven knows what?  Heck, I feel your pain, but the fact is that we were outvoted in 2020, by our fellow Americans (real and imagined), who were snookered by Boss Biden and browbeaten by his thugs.  They overlooked the lies, the threats, and the shakedowns, in favor of the complimentary Christmas hams and the free tickets to the ballgame.  Or, as the Romans liked to call it, bread and circuses.  Oh well.  In for a penny, in for a pound.  Either America will fight off this latest infestation of parasites, or it will succumb to them.  So be it.  Call it "the cycle of life".

I digress.  Boy, do I digress!  Anywho, here's Ron DeSantis's take on these matters, and proof positive that the federal government has become a redistributionist Ponzi scheme.  Despite what the Dems may tell you, the goal of this racket isn't to aid the less fortunate at the expense of the well-off.  It's to pad the pockets of the well-connected at the expense (albeit the deferred expense) of all the rest of us.  In simple terms, the bad news, America, is you're about to get fleeced!  The good news, however, is that you may not notice it until your pocket has been picked clean.

In other news, the Dems are proposing scads of terrible bills, most of which, thankfully, stand little chance of passing through Congress, so long as the filibuster remains intact in the Senate.  High on this list of legislative abominations is HR 1, which would amount to a Democratic/progressive takeover of local and state election authorities, with the goal of gaming all future elections in the Dems' favor.  The keystone of this effort would be the unilateral disarmament of election authorities in the face of would-be fraudsters.  Future elections, in other words, would be conducted on the honor system, and we all know how much honor prevails among (election) thieves.  The truth is we already do a terrible job of detecting and punishing election fraud in America...but occasionally we do find and prosecute it.  That offends the Democrats.  They want it established once and for all that there is no cheating in American elections -- that, in short, "there's nothing to see here".  That would give them license to cheat, ad infinitum, from here on out.  Why else would they howl in protest in response to simple election integrity measures that are commonplace in healthy democracies across the globe?  Why else, indeed?  You know why...  Because fraud, however much there may be in our system now, accrues to their advantage, and they know it.  Ergo, they want more.

Posted by Nicholas Waddy at 9:17 PM