Trump and Trade: A Win-Win for the American People 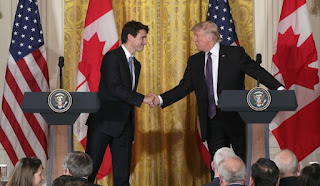 I'm pleased to announce the appearance of my latest article: "On Trade, Trump is Already Winning", which points out that, while the media is distracted by character assassination and abject pettiness, the Trump administration is making major headway in reforming our trading relationships with other countries.  The article first appear in the Lockport Union-Sun and Journal, and I expect it will be soon, or already has been, published in Livingston County, Olean, Bradford, Hornell, Wellsville, and Cortland.  In addition, it will appear in The American Conservative, my first national exposure!  Here is the article:

Posted by Nicholas Waddy at 7:20 PM No comments:

On the Lighter Side... 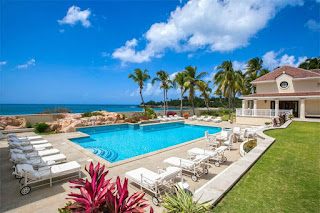 For those of you who enjoy Trump trivia and/or the lifestyles of the rich and famous, check out this story:

It seems President Trump is selling his modest Caribbean estate.  What a pity!  It looks like a lovely place.

As you admire his opulent abode, I suggest you reflect on the fact that an extremely wealthy man, who could easily have lived out his days in the lap of luxury, chose instead to step into the political arena, invite a firestorm of abuse and condemnation, spend millions of his own hard-earned dollars, and assume the awesome responsibilities of the presidency of the United States.  Does ego have something to do with it?  No doubt.  But public service, especially on this scale, still involves sacrifice, and lots of it.  I believe Trump ran for President first and foremost because he loves this country, and he saw that our political class was simply ignoring a variety of festering problems: bad trade deals, blue collar job losses, flagrant disrespect for our borders, etc.  He decided that he wouldn't sit idly by and watch the Clintons of this world profit from America's plight and hasten our nation's decline.  Good for him!  Say what you want about Donald Trump, but he's a patriot, and a little patriotism goes a long way...
Posted by Nicholas Waddy at 9:30 PM No comments:

I couldn't agree more with this article, which puts in perspective the changes involved in the Republican effort to repeal Obamacare.  The apocalyptic rhetoric of the Democrats is, as always, unjustified, and their self-congratulation in regard to their "certain" victory in 2018 is...premature, to say the least.

This is a very interesting article about the history and present predicament of FoxNews.  Clearly, the firing of Bill O'Reilly has hit the network hard.  I'm one of many conservatives who enjoyed O'Reilly's show, and it doesn't sit well with me that he was fired based on accusations that were never litigated in a court.  He was also the target of a campaign of character assassination sponsored by leftists.  Add to that the fact that the recent Harvard study documenting media bias confirmed that FoxNews, while less egregiously anti-Trump than all other networks, is hardly singing his praises in an unqualified way, and you start to see why many conservatives are tuning out.  If you ask me, we need more than one conservative news network.  Competition is healthy!

Lastly, here is an article about Trump's new budget.  Deep cuts to social welfare programs are just what the doctor ordered, if you ask me, although I would also like to see cuts to the bloated defense budget.  Under Obama, social welfare spending increased massively, and it never contracted again once the economy was once again "healthy."  It's typical of Democrats that, once they create a new program or expand it, they will never countenance any sort of cuts.  Get over it!  We need our government to slim down, and Trump is trying to get us on that course.  Bravo!


Posted by Nicholas Waddy at 1:46 PM No comments:

Has the media lost touch with reality when it comes to President Trump? Survey says...YES! 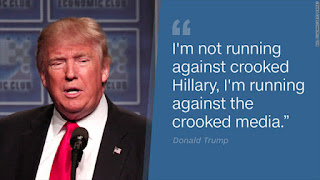 In my inaugural post to this forum, I would like to draw readers' attention to an important Harvard study recently released that confirms what any rational person already knows: the mainstream media is overwhelmingly liberal, is biased against conservatives, and is almost apoplectic with rage when it comes to Donald Trump.  To make a long story short, the study confirms that media coverage of Trump has been significantly more hostile than that which a typical Republican President would receive.  If one compares the media's attitude to Trump to, say, its attitude to President Obama, the contrast is even more stark.  Now, how can the media be trusted to provide the American people (or consumers of news overseas) with accurate information and analysis, when it starts every day with the assumption that Trump is evil and must be stopped?  Simply put, it can't be trusted at all.  It will report any story, no matter how petty or fabricated, if it helps to advance the narrative of Trump's wickedness.  Personally, I don't plan to give up on the mainstream media, since even its deliberate falsehoods are "newsworthy" on a certain level (it pays, after all, to know how the enemy thinks), but increasingly one cannot expect even the smallest degree of professionalism from these leftist hacks.  "Journalistic integrity" has always been something of a contradiction in terms, but the depths to which the U.S. news media has sunk are truly sad.  The miracle, of course, is that, even after almost two years of consistent media assaults, Trump is still standing, and more than that...he's the President of the United States!  No more convincing proof could be offered of the inherent (though hardly infinite) wisdom of the American people.

https://heatst.com/culture-wars/harvard-study-reveals-huge-extent-of-anti-trump-media-bias/
Posted by Nicholas Waddy at 11:10 PM No comments: