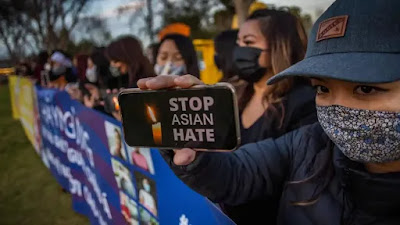 Friends, no one can deny that hate and violence motivated by hate are real and extremely upsetting and frightening to people who may be targeted (and to plenty who may not be), but that doesn't change the fact that the recent media narrative about anti-Asian bigotry and violence is factually deficient in a number of ways.  A)  There's insufficient proof of a rise in anti-Asian hate crimes, and such crimes are in any case very rare by any objective standard; and  B)  the media's consistent implication that hate crimes are invariably committed by whites is grossly inaccurate; and C) Asian-Americans are much less likely to be victims of any kind of violence than are members of other racial and ethnic groups.  Ergo, to fetishize "Asian hate" (committed by "white supremacists") is to to construct a narrative that explains very little of the violence in America, and very little of the violence and hate experienced by Asians themselves.  It does, however, advance the Left's master narrative, which demands the demonization of whites and the utter disregard of hate and violence perpetrated by anyone else.

This brings up a larger and more vexing question: how does one even begin to have a dialogue with people whose perceptions of the world and its problems are fundamentally at odds with the facts, and whose delusions are nurtured and sustained by a media that exists for no other purpose?  The "conversation" about "Asian hate" currently pursued by the mainstream media solicits one and only one response from the public: concurrence.  To question the narrative of "Asian hate" in any way would be, of course, to perpetuate "white supremacy", even if that narrative was deceptive and flawed to begin with.  The BLM movement was sustained by similar "logic": it was easier for almost everyone in America to nod knowingly and express sympathy for black Americans victimized by the police than it was for them to use their powers of critical thinking to question the idea that the police are really the problem.  The truth is, therefore, that the reality of hate and violence as it is experienced by Asians, and by non-Asians, in America is irrelevant to how leftists perceive it, which will always be in stark "antiracist" and therefore anti-white terms, not to mention in alarmist terms, despite the society-wide reduction in violence over the last several decades.  Until we change the media itself, and its agenda of fearmongering and race-baiting, we will never have a fruitful dialogue about how to reduce hatred and violence in this country.  Quite simply, the Left has poisoned the well, and anyone who drinks of it will be poisoned too.

In other news, the Trump Train is about to get rolling again!  President Trump has decided to build his own social media platform, and I for one eagerly await it.  I assume it will become an instant sensation on the right, and we desperately need an alternative to the Big Tech platforms, because it would appear that the wind went out of Parler's sails after Amazon's infamous efforts at sabotage.  Bring it on, therefore, President Trump!  The sooner, the better.

Well, it looks like the Biden administration's policy of denying the existence of a crisis at the border is crumbling under the pressures of (gasp!) reality.  That's the good news.  The bad news is that Biden intends to "fix" the problem of migrant detention by no longer detaining them.  That's right: in future, the Border Patrol will be a revolving door -- a processing agency only -- that exists to usher migrants to wherever they wish to go.  That will ease the troubled consciences of AOC and her ilk, whose hearts bleed for the detainees, but it will also accelerate the flow of migrants and assure them that illegal immigration is promptly rewarded in the USA.  In other words, things are about to go from bad to worse.

Lastly, I know some of you don't care for these coronavirus vaccines, but personally I'm glad to have received my first shot of the Pfizer vaccine and I look forward to my second.  There's still a lot we don't know about COVID, but one thing is clear: it's better NOT to have COVID than it is to have it.  The vaccines seem to do a good job of protecting people from that specific threat.  Be that as it may, the Biden administration is claiming credit for the increasing availability of COVID vaccines, but the fact is that the Trump administration laid the groundwork for their development and production on an industrial scale and at "warp speed".  We will soon, in all likelihood, be in a position to get back to "normal" in this country, and it will be as a result of the leadership of Donald Trump and Mike Pence when we do.  Despite all the media naysaying, the United States handled the challenge of the coronavirus pandemic better than many other countries, as Europe's current agonies amply prove.  We might be justified, therefore, in giving ourselves a tentative pat on the back.  While we're at it, let's tip our hats to DJT as well.

Posted by Nicholas Waddy at 3:46 PM