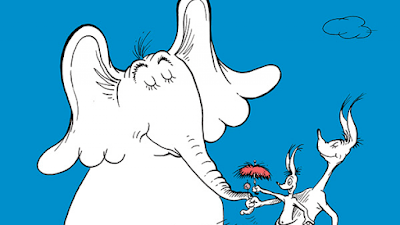 Friends, just when you thought the Dems and their beloved cancel culture had hit rock bottom, they always find new ways to plumb the depths.  Case in point: their recent inquisition against Dr. Seuss.  Now, I have no idea whether any of Seuss's books really do contain "racist" content, and I couldn't care less, because, well, that would be a good reason to read them critically to children, but not a very good reason to erase them from public memory and blast every known copy into space.  Are we honestly so fragile these days that any speech, any form of entertainment, any book or article, that contains a word or a phrase to which someone (on the Left) takes offense must be eliminated?  Good grief!  Kudos, therefore, to the New York Public Library, which is taking a stand for free speech and simple sanity.  We need more Americans to do the same!

Speaking of free expression, it's heartening to see the great State of Texas get on board with efforts to rein in Big Tech.

Apropos of my post last night, there's a new poll that bunches Mike Pence, Ron DeSantis, and Ted Cruz at the top of the heap of potential GOP presidential candidates in 2024, should our beloved leader and demi-god DJT decide not to run.  This is interesting, because these results vary significantly from the CPAC straw poll.  They also indicate that the more establishment-oriented and evangelical Mike Pence still enjoys considerable support, as does Ted Cruz, the unofficial Mayor of Cancun.  I guess what all this means is...it's a wide open race.

As predicted, our border crisis, which the Biden administration insists isn't a crisis, continues to escalate.  One has to wonder whether the Dems are even alarmed, or whether this was part of their plan all along.  Maybe eternal Dem rule really is as simple as: 1) encourage tens of millions of the Earth's poor to come hang out in America, and 2) pass H.R. 1, federalizing elections and making it impossible to detect whether a would-be voter is eligible or not, thus facilitating non-citizen voting.  It's a bold gambit, but when you control the media and reality is, for leftists, a choose-your-own-adventure story anyway, it might just work!

President Trump is reacting to the "tsunami" of "refugees" at the border with a statement strongly critical of the Biden administration's policies:

Now, you might argue that failure to respond adequately to a crisis is a betrayal of the American people.  Okay.  You might also argue that overreaction to a crisis, or the exploitation of a crisis, is ALSO a betrayal of the public.  Well, the sad truth is that the advocates of big government have used almost every crisis over the last 500 years to move the dial a little bit (and sometimes a lot) in the direction of more centralized, bureaucratic power and more governmental spending.  The COVID pandemic is no exception, and the spending, rest assured, will outlast the virus -- as will the associated debts!

Have you heard about how forward-looking the Chinese are when it comes to "green energy"?  Boy, we could learn a lot from them, right?  NOT!  The Chinese are the biggest blights to the environment going, and they show no sign of cleaning up their act.  Propaganda to the contrary is just that -- propaganda.

People are starting to scratch their heads and wonder why, oh why, is Joe Biden hiding from the voters and even from the (thoroughly domesticated and obedient) press corps?  There's evidence that his poll numbers are starting to slip, as the honeymoon period winds down and criticism inevitably begins to mount.  Is there something grievously wrong with Biden that makes releasing him into the wild too risky?  Your guess is as good as mine...

I'm not sure if you heard, but there was supposed to be another insurrection yesterday, a coup d'état of QAnon supporters and rabid Trumpers.  The streets of Washington, D.C. were sure to run red with blood.  So how did that turn out?  Can anyone tell me?  I'm curious.

Finally, the Donald is up to his old tricks, slamming RINOs, the Wall Street Journal, Mitch McConnell, and the GOP establishment in Georgia.  In many cases, he makes fair points about his enemies, but one has to wonder how often Republicans can violate Ronald Reagan's hallowed 11th Commandment -- "Thou Shalt Not Speak Ill of Any Fellow Republican" -- and prosper politically.  Much of this angst is natural after the loss of a close election, but let's hope that GOP luminaries can let bygones be bygones by Fall 2022.  That would be in their, and the country's, best interests.