The "Yellow Peril", Then and Now 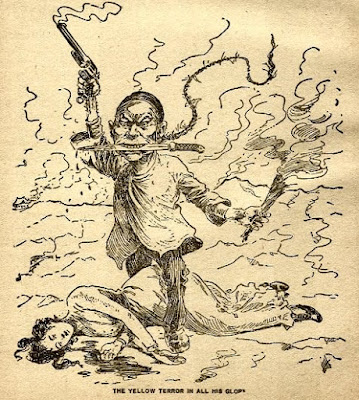 Friends, it's no secret that Asian-Americans were, historically, subject to rampant and intense discrimination.  It's also no secret that they've transcended those obstacles and become, on average, more educated and wealthier than whites.  As our nation's most successful citizens, Asians ought to view this as a land of opportunity.  They ought to want to maximize their individual liberty, minimize government regulation and the burden of taxes, and emphasize individual achievement so that they will be rewarded for their hard work and exceptional merit.  In other words, Asian-Americans ought to be conservative Republicans.  Instead, the vast majority of Asians vote for Democrats.  In fact, the GOP's share of the Asian vote has declined since the 1990s.  The recent surge in media coverage of "Asian hate" is naturally designed to reinforce this trend.  Leftists want Asians to be as fearful of "white supremacy" as humanly possible, and for all the obvious reasons.  The fact is that, by not competing vigorously for support from Asian-Americans, Republicans are blowing one of the great opportunities they have to make inroads among racial minorities.  Fortunately, there's hope.  In California and beyond, Republicans are starting to target Asian-American voters.  They need to continue to do so, and they need to do it on a much larger scale.  Democrats want to lure every non-white population group onto the same metaphorical plantation of government dependency where, sadly, most blacks now live.  We can't let them do it.  The future of the GOP -- not to mention the future of the country -- relies on our ability to attract higher and higher levels of minority support, and our ability to prevent the dastardly Dems from gaining a monopoly on the political allegiances of non-whites.  Let's put our backs into it, shall we?

This fine article exposes the hollowness of the DOJ's lawsuit targeting Georgia's recent election integrity bill.  Why, it's racist because...everyone knows Georgia is racist!  Sure, the provisions are unremarkable and in fact commonplace in American elections, but we all know what happens when white Georgians pass laws and such: white supremacy!!!  Yeah, right.

As this article suggests, the Dems are taking some BIG risks by pressing ahead with their massive spending plans, despite the uptick in inflation.  They're betting that unlimited federal spending won't ever have a fiscal downside...and I guess they must be assuming that, if we have serious inflation, they'll find a way to blame Trump for it, or maybe they'll weaponize our economic insecurities in order to lure us even deeper into the morass of socialism.  On that score, they may be right.

Tucker Carlson says that the U.S. government is spying on him.  Well, maybe it is, and maybe it isn't, but it's the kind of charge that makes someone look loony, so I would be careful, if I were him.  In effect, though, Carlson and other conservative journalists have to act with extreme caution at all times, because it's a given that powerful forces in the establishment are always trying to silence and/or destroy them.  Personally, I think it's a small miracle that Tucker is still on the air, and Fox News is still clinging to its semi-conservative worldview.  You better believe that the lefties are working diligently to change all that.

Posted by Nicholas Waddy at 5:23 PM