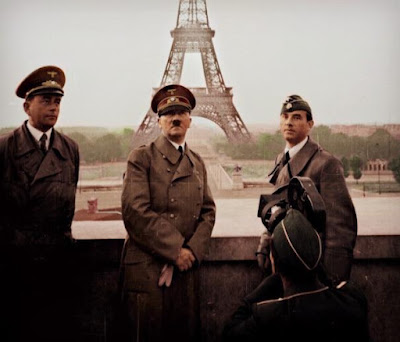 Friends, what could be more heart-stirring than spending a few days in the City of Light...after you've just conquered it?  Few of us ever have that singular pleasure, but Hitler did.  And that's after fighting for four years in the trenches of the Western Front just to hold onto a few square yards of French mud, too.  One can hardly imagine his glee -- not that he betrays much giddiness in this famous snapshot.

All this and more is covered in this week's Newsmaker Show, starring me and Brian O'Neil.  In terms of current events, we dissect the hypocrisy and rank stupidity of the Left on issues of race and gender, the use of hyperbole in political rhetoric, the fate of the Dems' election takeover bill in the Senate, the impact of rising inflation and crime, the exploitation of January 6th by the Left, and the truth about "right-wing" violence in America, which is incredibly rare.

And in our "This Day in History" segment, we talk about the fateful conversation between President Nixon and H.R. Haldeman in the Oval Office on June 23rd, 1972, later refered to as the "smoking gun" that doomed the Nixon presidency; the elevation of Gamal Nasser to the Egyptian presidency, prior to the Suez Crisis; and Hitler's curious package holiday in Paris in June 1940.

Don't miss it!  Tune in today.

In other news, the Michigan Senate, which is GOP-controlled, is slapping down persistent rumors that massive fraud was perpetrated in the state in November 2020.  The findings don't eliminate the possibility that individuals may have cheated, but it does make it harder and harder to sustain the notion that the Democratic Party stole the election outright.  My own view is that, while there are plenty of valid reasons to believe that the 2020 election was "rigged", many of the wilder "conspiracy theories" about election fraud are likely to be false.  C'est la vie.

Not surprisingly, the American people have very little faith in the mainstream news media.  And this, for Republicans and conservatives, is actually very good news. because, if the voters believed what CNN, MSNBC, ABC, CBS, and NBC were telling them, we'd be sunk, for sure.  Their skepticism, on the hand, will drive them increasingly to alternative media sources, where the right-wing perspective flourishes.

Posted by Nicholas Waddy at 5:57 PM