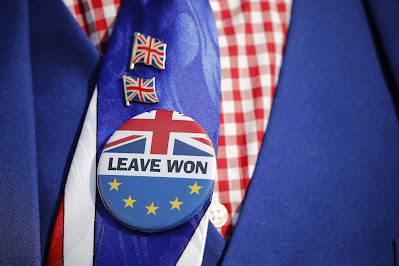 Friends, on the five year anniversary of the Brexit referendum that resulted in a surprise victory for the "Leave" faction, WaddyIsRight applauds the courage and steadfastness of the British people!  The elite tried every trick in the book to manipulate/intimidate the Brits into staying in the E.U. -- and they replied, "Sod off, globalists!"  Bravo.

Here's a brilliant analysis of the legacy of that glorious day:

Today we got word that Rudy Giuliani will no longer be allowed to practice law in the State of New York, because his supposed falsehoods about the 2020 election "damage the proper functioning of a free society."  Ha!  And what of Democrats' falsehoods about Jan. 6th, or about election integrity bills introduced in various states, or about the results of the 2018 gubernatorial race in Georgia?   Do they jeopardize our sacred democracy?  Nah.  Dems never lie.  That's a given.

Shockingly, a socialist is set to become the next Mayor of Buffalo.  I deplore this travesty, and I sincerely hope the good people of Buffalo will find a way to avert this catastrophe.  If necessary, a write-in campaign should be mounted to reverse the rising tide of Bolshevism.

DJT is throwing cold water on the idea that he might be the next Speaker of the House.  I can't say I'm surprised.  Donald Trump presumably sees himself as our country's past and future president.  All other offices pale in comparison.

Finally, given the horrors of our recent "insurrection", it's surprising how few people have been convicted of any crime.  This story catches us up on the legal mechinations surrounding some of the accused.  Note that one defendant, in pleading for leniecy from the court, essentially declared that she was voluntarily undergoing reeducation and attempting to purge herself of Trumpism.  Sad to say, but that's probably an effective strategy if one's desire is to avoid jail time.  Nonetheless, the American people may well get to render the ultimate verdict on Trump, Trumpism, and Trump supporters.  2022 and 2024 will tell the tale.