American Justice: Blinder Than Ever? 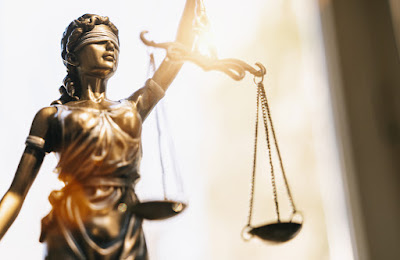 Friends, my latest article is based on several of my recent comments about the rank injustice of the suspension of Rudy Giuliani's law license in my home state of New York.  I argue that Rudy Giuliani is among the first of what we can safely assume will be many casualties in the war to defend our liberties against neo-Marxist depredations.  Expect it to appear soon at World Net Daily.

Rudy Giuliani: Martyr for the Cause

Question: what's the difference between one of America's most respected prosecutors (and most successful mayors), and a disgraced attorney chased out of the legal profession for his rabble-rousing mendacity?

Why "five years of Trump"?

Because our nation's jarring experience with Trumpism was enough to convince leftists to throw all notions of fairness and tolerance out the window, and to dedicate themselves to the obliteration of their political enemies by any and all means necessary, including disbarring their rivals for exercising their right of free speech, and obstructing the access of conservatives to legal representation. It's part of the Left's new scorched earth approach to self-empowerment and totalitarian dominion. Worse, it's just beginning. We can expect even more egregious acts of persecution to follow.

The decision of five judges of New York State's Supreme Court to suspend the law license of Rudy Giuliani is an outrage. It is viewpoint discrimination, pure and simple. It presages a political purge of the legal profession that would, if carried to its logical conclusion, be fatal to American democracy. The law and the justice system would become playthings in the hands of neo-Marxists, notable mainly for their searing contempt for all forms of dissent. It would be only a matter of time, in fact, before these fanatics would turn the weapons of disbarment, censorship, intimidation, and worse on each other. American politics would become a circular firing squad. “Cancel culture” would, in due course, erase every one of us.

These five judges allege that Rudy Giuliani made false statements about the election of Joe Biden to the presidency, and these statements "damage the proper functioning of a free society". They further allege that Giuliani's statements “directly inflamed tensions” that contributed to the lawlessness of January 6th.

That is a stretch. As Jonathan Turley – no fan of Giuliani – demonstrates, “America's Mayor” was no more guilty of inciting the Capitol Riot than countless Democratic lawyers and politicians were of fostering the BLM riots of 2020.

Were some of Giuliani's claims about the 2020 election false? Absolutely. Lawyers make false statements routinely. Whether Giuliani made these statements in error, or in bad faith, however, is something that only Giuliani himself can know for sure. And it is something that the Supreme Court of New York State barely bothered to investigate.

Rudy Giuliani faces persecution for the simple reason that his advocacy of the rights and interests of Donald Trump and Trump supporters offends the Democratic elite. The suspension of his law license is illegitimate and wrong, therefore. Republicans, conservatives, and lovers of liberty in general should see it for what it is: a direct attack on our constitutional rights and freedoms, and an effort to silence us.

We must stand with Rudy, therefore, while we still can.

Dr. Nicholas L. Waddy is an Associate Professor of History at SUNY Alfred, and blogs at: www.waddyisright.com. He appears on the Newsmaker Show on WLEA 1480/106.9.

And here it is at World Net Daily:

In other news, check out this fascinating McLaughlin poll.  It shows Biden's approval rating still at a relatively strong 55%, but it also shows Donald Trump in great shape to win the GOP nomination in 2024...and in good shape to win the general election, especially if Kamala Harris is the Dems' standard-bearer.  Perhaps most importantly, McLaughlin shows Republicans narrowly ahead on the generic ballot for 2022, and a GOP win in the midterms would be HUGE!

Here's some insight on Ron DeSantis's biggest dilemma: he probably wants to run for president, but he doesn't want to run against -- or antagonize in any way -- DJT.

Here's a terrific exposé of leftist disinterest in the fate of the thousands of black men murdered in this country each year -- almost exclusively by other black men.  If it ain't "racist", it ain't news.

I've been impressed by the courage of Senators Manchin and Sinema, who are standing up to the far-left and refusing to "nuke" the filibuster.  Here's an article with a contrary point of view.  This guy thinks that Manchin will ultimately cave and give progressives what they want.  I'm not so sure.  If he was going to relent, it seems to me that now is the time: probably the only time when it would make any difference (or maybe not, if Sinema stands firm).  Yeah, Manchin voted to begin debate on the Dems' election takeover bill, but that's a meaningless procedural question.  When the chips have been down, Manchin has been a stand up guy -- so far.  He's a politician, though.  You never know.

This report isn't quite as "explosive" as it's billed.  Yes, China has mentioned the possibility that future bioweapons could be designed to target specific ethnic groups.  That isn't the same as creating such weapons, though!  As a matter of fact, any major power would be remiss not to consider the full range of potential bioweapons.  Now, in all likelihood, COVID-19 wasn't designed to kill the maximum number of Caucasians...but imagine if it had been!!!

Arizona, a la Florida, is attempting to make it mandatory for public schools to teach "the evils of communism".  These legislators mean well, but good luck injecting some common sense into our (neo-Marxist) curricula.  Hamstringing woke educators is worth a try, I suppose, but I'm beginning to think that the whole enterprise of public education may be fatally flawed.  Can we be surprised that government-run schools ultimately support the relentless expansion of government power?  I suggest we abolish the public schools and give every parent a voucher to use in a private or religious school of his/her choice.  What better way to forestall "communism", am I right?

Yup, Western Civilization is circling the drain, BUT the nuclear family, somewhat to my surprise, is making a comeback!  Of course, the other side of this coin is that simply having children has become passé...

It's a miracle!  YouTube has banned a left-wing organization!  I guess this means that Google is ever-so-slightly concerned about projecting an image of even-handedness.  Personally, though, I'd rather they just stopped censoring us altogether!

Finally, a professor in Mexifornia has praised Stalin as "one of the great leaders of the 20th century"!  Now, I will come to this egghead's defense, insofar as I agree that Stalin was a "great leader" -- he just wasn't a good leader.  We could say the same about Hitler, Mao, Ho Chi Minh, Barack Obama -- you get the idea.  Now, Prof. Foot-in-Mouth also claims that Stalin was a "great listener".  Here he might be on shakier ground.

Posted by Nicholas Waddy at 3:59 PM