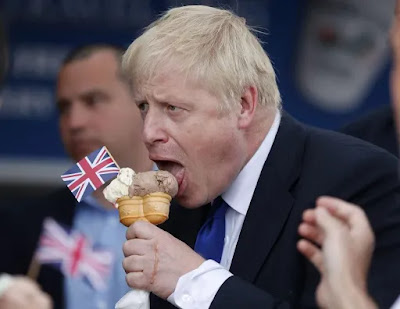 Friends, my latest article focuses on the politics of race and gender, and on some particularly dim-wittred remarks recently made by the "Conservative" British Prime Minister Boris Johnson.  I love what Boris had done to the Labour Party (here's hoping they never make a comeback), and his herculean efforts on Brexit are much appreciated, but he does have a very suspect "moderate" streak in him.  It's important to call him out when he strays off the reservation.

Let's Be Honest: Establishment Views on Race and Gender are Asinine and Hypocritical

Recently, at the G7 summit, British Prime Minister Boris Johnson, a Conservative and, allegedly, a “conservative,” declared that the main post-pandemic aim of world leaders must be “building back greener, building back fairer and building equally and – how should I put it? – in a more gender-neutral and perhaps a more feminine way.”

He certainly did not realize it at the time, but his statement was a shining example of the moral and intellectual muddle that defines the ideology of the left-leaning global elite. His views and proposals are as senseless as they are destructive.

First, the Prime Minister did the usual bowing and scraping to the cherished ideal of a “green” transformation of the world economy, which would halt the allegedly fatal effects of climate change. He went on to sing the praises of “fairness” and equality, which might refer to the goal of reducing income inequality or might be an allusion to the even more fashionable obsession with “equity,” which implies the (enforced) equalization of outcomes between people of different backgrounds. In practice, it means race and gender quotas and the abandonment of objective standards of merit.

The truth, though, is that, whether or not Johnson's ideals are worthwhile, they are simply incompatible. Consider the fact that global income inequality has not been rising in recent decades. It's been in steady decline. Why? Because of the rapid development of what used to be known as the Third World.

More and more people in Latin America, Asia, and even Africa are enjoying modern, middle class lifestyles, and fewer people than ever are hungry and destitute. One of the biggest reasons for this transformation is the ability of developing countries to industrialize, urbanize, and make agriculture more efficient. To do so, however, they need access to energy, obtained overwhelmingly from fossil fuels, to power cities, factories, vehicles, personal electronics, and more. The quickest way to short-circuit the phenomenal progress being made in these developing countries would be to impose punitive anti-carbon policies on their upstart economies.

We in the developed world can (barely) afford to pay through the nose for energy produced by solar panels and windmills. Developing regions assuredly cannot.

The more straightforwardly nonsensical claim made by Britain's Prime Minister, though, was the idea that the world needs to become “more gender-neutral” and “more feminine” simultaneously. It does not seem to have occurred to him that one cannot minimize and maximize the impact of gender in the same breath – or, rather, one can do so in purely rhetorical terms, but it beggars belief that a coherent policy could arise out of such balderdash.

What Johnson means, of course, is that we need to make the world more friendly to transgender people and to women (the “oppressed”) and less in thrall to men (the “oppressors”). And, to that extent, Johnson is merely giving voice to what now seems the stock assumption of most establishment thinkers: that race and gender are mere theoretical social constructs, BUT they nonetheless magically acquire solidity and permanence when we are talking about categories of people we either like (non-whites, the transgender crowd, and women) or don't like (white people and men). Then these categories tell us precisely whom to praise and to condemn; whom to reward and to penalize; and whom to shift to the center of public policy and debate, and whom to marginalize. Race and gender are, in other words, purely imaginary, fleeting, and meaningless...and they are at the same time the most important things in the world and define our position in it.

To be sure, Boris Johnson's pronunciamentos are utter folly. One might be tempted, then, to take solace in the fact that, like virtually everything that is said at a G7 summit, his remarks were mere hot air. They will have little impact as individual nation-states pass laws, appropriate funds, and make policy decisions.

The sad part, though, is that the West, and the world, are increasingly run by men (and, yes, it's still mostly men, even if they're ashamed to bear the stigma of their “toxic masculinity”) who champion such convoluted, and often divisive and toxic, ideas.

Even sadder must be the realization that Boris Johnson supposedly represents the “stodgy” political right. How much more unhinged, self-contradictory, and asinine, therefore, are the ravings and dogmas of the Left?

In other news, the Washington Post (of all media outlets) is exposing the hypocrisy of Democratic Senators who want to trash the filibuster...after praising it just a few years ago.  I guess "Jim Crow" is all in the eye of the beholder, huh?

And here's a really thought-provoking article about pandemic politics and how the elite weaponized the coronavirus to entrench itself in power and expand its wealth.  That, in a nutshell, is the biggest problem that we "small government" conservatives face.  Every crisis -- and I mean every crisis -- is an excuse for the bureaucratic-corporate elite to expand their control of our economy and society.  I mean, when does government ever shrink, right?  The last year or so has seen one of its biggest expansions in history, in fact.  Will we ever go back to the good old days of spending just 30% of GDP on government?  I doubt it.  We're at 45% now.  And climbing.  Scary.

Posted by Nicholas Waddy at 6:01 PM