Discrimination: It's the Hot New Thing! 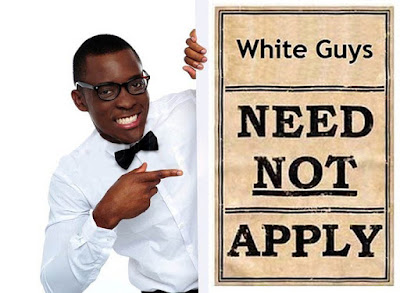 Friends, remember when our goal as a nation was to treat everyone fairly and equally?  How naive we were!  Lefties have found a much better solution to our racial and ethnic problems: figure out who's "in" and who's "out", and lavish advantages and praise on the former and disabilities and excoriation on the latter.  In other words, let whitey have it!  About time, right?

My latest article celebrates the decision of the Sixth Circuit Court of Appeals, striking down the discriminatory aspects of the "American Rescue Plan".  It's a start.  The Dems won't give up, though.  They'll be back with more stratagems to divide and conquer.  Stay vigilant!

Check out the article at Townhall and see what you make of it:

In other news, here's a very thought-provoking analysis of the potential fallout from the changing narrative on the origins of COVID-19.  The "experts" assured us that the disease simply couldn't have come from a lab.  Now, the experts are backtracking, and Donald Trump seems like a world-class virologist.  Makes you think!

Here's a great argument for voter ID: simply put, almost every civilized country already has it!  Plus, even with the changes that GOP legislatures are pushing in places like Georgia and Texas, voting in the good ole USA will still be easier than almost anywhere else in the world.  And this is Jim Crow 2.0???  Gimme a break.

There's a special election today in New Mexico.  The Republican candidate isn't especially likely to win, but...oh, if he could!  The alarm bells would really start to ring on the Left.

Lastly, what's become of downtown Portland under far-left rule is truly astounding.  It could be a glimpse of America's dystopian future, too.  The good news (I guess) is that it's mostly poor minorities who are "afflicted" with Portland's dysfunctionality.  In other words, it's mostly the people who voted overwhelmingly blue who are getting blu-ed in the face.  I guess there's some justice in the world, huh?

Posted by Nicholas Waddy at 2:53 PM