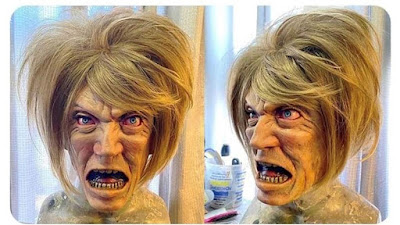 Friends, last Halloween you might have seen some trick-or-treaters wearing this popular mask.  You guessed it: they were pretending to be a "Karen", an entitled, angry, racist white woman.  Of course, the stereotype of a "Karen" is itself racist, but it's anti-racist racism, so it's cool.  I'm glad we got that settled.

Who's the biggest and baddest Karen of them all?  It's looking like the answer might be: Senator Kyrsten Sinema (D - Arizona).  Now, you wouldn't think that an avowedly feminist and bisexual Democratic Senator would even make the list, but Sinema's insistence on bipartisanship and upholding the Senate's tradition of the filibuster is making progressives hopping mad.  Sinema and Joe Manchin are standing in the way of the enactment of many elements of the progressive agenda.  Ergo, Sinema's a baddy, and all baddies are racists, ipso facto.  Calling an old white guy like Joe Manchin a racist is a no-brainer, but it looks like now the LGBTQ+ heroine Krysten Sinema is in for the same treatment.  She's got "toxic white lady energy"!  You can't make this nonsense up, people.

In other news, and relatedly, we're getting poll numbers that prove that leftists are becoming disspirited about the slow pace of change under Bidenist rule.  Congress is supposed to be grinding conservatives underfoot and instituting universal Bolshevism, but, because of the filibuster and Sinema and Manchin, it's no dice.  This was inevitable, of course.  Biden and his cronies on Capitol Hill could never be woke enough to satisfy the true believers.  There's bound to be a reckoning.

More good news: most Americans don't like Big Tech and want these massive companies broken up.  This is, in addition, a bipartisan movement.  Will it someday bear fruit?  I hope so.

Also, most Americans are increasingly comfortable with resuming "normal activities" now that we have the coronavirus on the run.  I went to a car show last night and virtually no one was wearing a mask.  It was a refreshing change!

Normalcy may be returning in the good ole USA, but Canada is clinging on to its pandemic anxieties for dear life.

The U.S. military believes that China has no imminent plans to attack Taiwan, and it may even lack the military means to take the island by force.  Interesting.  It seems to me that there are a lot of unanswered questions about today's military balance.  For one thing, virtually all advanced countries are bristling with sophisticated anti-ship missiles.  Assuming that the missiles will "always get through", modern navies are in big trouble.  That's a potentially flawed assumption, however, as anti-missile tech has also greatly improved.  The future of places like Taiwan may very well come down to this: who has more and better missiles, and would China risk frightful losses among its amphibious expeditionary force...and possibly the destruction of that force and of its navy before any of it ever got near Taiwan?  Someday we may find out.

Calls to abandon academic standards, and especially standardized testing, are growing louder and louder.  How are we ever to implement "anti-racism", for instance, if black people are asked to fill out bubble sheets and answer questions?  That's textbook white supremacy!!!

It's official: "Juneteenth" is now a federal holiday.  That happened mighty quick, didn't it?  The vast majority of Congressional Republicans voted for the bill, incidentally.  Now, on the face of it, there's nothing wrong with celebrating the end of slavery in the USA, but the fact is that a short time ago most of us had never heard of "Juneteenth", and we certainly didn't understand its significance.  Apparently "President" Biden was among those who found "Juneteenth" inscrutable.  Let's also admit that most politicians and more than a few non-politicians are now embracing Juneteenth for one reason and one reason only: virtue-signalling.  We can't possibly pass up an ideal opportunity to demonstrate how "anti-racist" we are, right?  Let's also remember that we already have a federal holiday that focuses on our country's struggle to achieve racial equality: MLK's birthday.  Now we have two holidays on the theme of race, plus Pride Month, plus Women's History Month, plus...you get the idea.  The progressives won't be happy until EVERY conversation we have, and every day of the year, is devoted to America-bashing and pillorying white racists, i.e. anyone who doesn't endorse neo-Marxism and reverse racism.  Republican politicians may think they can get a little political cover by voting for the Juneteenth bill.  They're wrong.  The harrowing cries of "Racism!" will never stop.  They're the heart and soul of the Democratic Party and the progressive movement, after all.  Get used to it.

Posted by Nicholas Waddy at 2:57 PM