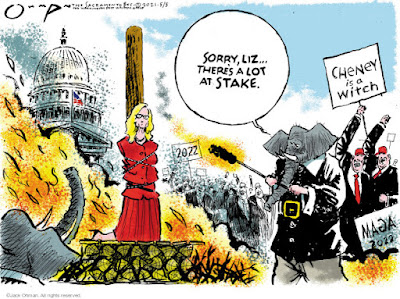 Friends, it's become more and more obvious the high esteem in which Democrats and mainstream media talking heads hold Liz Cheney, one-time Republican stalwart and current GOP turncoat and January 6th Committee luminary.  Not surprisingly, therefore, Liz is raking in the cash -- from people who hate the Republican Party and all that it stands for.  As the article below makes plain, the same people who donate big-time to the Lincoln Project, a cabal of anti-Republican Republicans, are writing checks galore to Liz Cheney.  Thus, it's only natural that real Republicans are calling for Liz to be expelled from the House Republican Conference, of which (irony of ironies!) she was the chairwoman just a few short months ago.  Boy, oh boy!  How quickly the wheel of fate can turn...

In other news, although media polls aren't unanimous, they are arriving at a consensus: Republicans are favored to win in 2022.  Given the pro-Dem bias built into so many of these polls, I'm feeling very good about our chances.  One thing is for sure: all the media's obsessive moaning about January 6th seems to be going nowhere with the American people.  The Dems themselves are more convinced than ever that Republicans are traitors and scoundrels, but unless the voters agree all this caterwauling will come to naught.

Posted by Nicholas Waddy at 9:55 PM