To Jab Or Not To Jab? 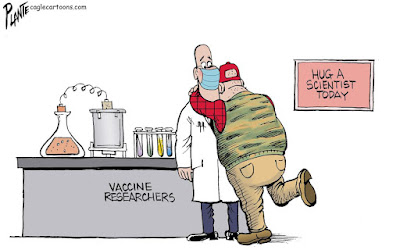 Friends, as the Dems and their desiccated standard-bearer sink ever lower in the polls, they take some comfort in the fissures that beset the GOP and the conservative movement.  For instance, they hope that we will spend most of the next three years fighting over the legacy and the future of one Donald J. Trump.  Heard of him?  Yeah, he does tend to get people riled up.  They also hope that our pro-science and anti-science wings, as they see it, will go at each other.  And we have to admit: they have a point.  There is significant disagreement in the Republican Party about the efficacy of the vaccines.  Most of the GOP establishment is thrice jabbed and proud of it, while many rank and file conservatives are avoiding the vaccines as though they were the plague.  Trump himself figures in this dichotomy, as he proudly asserts ownership, politically speaking, of the vaccines, but demurs on the question of whether people should be compelled to take them.  The Dems are clearly hoping that COVID, one way or another, will be the stumbling block that prevents the GOP from flourishing in the months and years ahead.  The bad news for them is that the thought processes of American voters are mind-numbingly simplistic: if things are going badly, then the party in power suffers for it.  The voters, especially in 2022, probably won't care much what Trump does or says, and all the COVID hysteria in the world won't persuade them to vote for a party that fails to deliver on its promises.  But perhaps the key word there is "probably".  No one knows for sure.

As Elon Musk stretches his legs rhetorically and defies woke orthodoxy, we on the right are inclined to praise him.  So be it.  It's worth remembering, however, that Musk didn't get rich by flying in the face of the global elite at all times.  For one thing, he's a friend of Red China, as you'll see here:

Finally, in case you've wondered how all those bogus stories about Trump-Russia collusion blew up in the mainstream media, a lot of it has to do with the insidious connections between elite "journalists" and Democratic hacks.  Read all about it (if you dare):

Posted by Nicholas Waddy at 2:52 PM