The Face of Hypocrisy 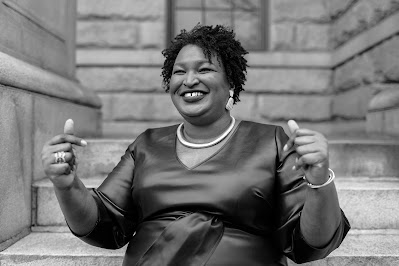 Friends, no one can deny that Stacey Abrams is the sexiest woman alive, but methinks she nonetheless has a credibility problem.  The Democrats, who, in the wake of the 2020 election, told us repeatedly that the integrity and reliability of our system of elections was sacrosanct -- that raising questions about the results of an election was tantamount to "insurrection" and "treason" -- are also unanimous in their unstinting praise for Stacey Abrams, who earned her fame by flatly rejecting the legitimacy of Georgia's gubernatorial election of 2018, which she lost.  Abrams never pursued her wild theories about how the election was stolen in court, mind you.  She simply never conceded to Brian Kemp, who won the Georgia Governorship, and to this day has maintained that hundreds of thousands of black Georgians were prevented from exercising their right to vote.  Keep in mind that preventing a single Georgian, of any race, from exercising his or her right to vote would be a violation of the law.  Criminal acts, last time I checked, usually result in prosecution.  No one has been prosecuted for electoral violations related to the 2018 election in Georgia.  Be all this as it may, the point is this: it's every American's right to question the legitimacy of whatever election they please.  Democrats can therefore believe to their dying day that Stacey Abrams was "cheated" out of the Georgia Governorship (she wasn't), and they can say so as often as they like, but what gets my goat is that they will champion the cause of an election skeptic (Stacey Abrams) one minute, and rail against the categorical wickedness of election skepticism the next (Biden's "win").  Sorry, Dems.  Sorry, Stacey.  That dog won't hunt!

Anyway, I forgot to mention it, but Abrams is running AGAIN for Governor of Georgia.  Good luck to her!  In 2022, which should be a very unfavorable cycle for Democrats in general, I don't rate her chances very highly.

In other news, the Supreme Court is considering the "viability" of Roe v. Wade, and it's high time they did so.  Will the Justices have the gumption to strike down this abomination, and restore to the states the authority to regulate abortion, more or less as they see fit?  I dunno.  Increasingly, though, leftists are making arguments for the retention of Roe that have little to do with the Constitution, and more to do with what they see as the "justice" of their cause, and with the carnage in the streets that they warn would be the consequence of curtailing "abortion rights".  SCOTUS will need to gird its loins if it intends to disappoint the Left and protect the rights of the unborn.  The hue and cry will be immense!

Finally, we all know that leftists excel in activism and especially in boycotts, which can be astoundingly effective at bending corporations and other institutions to the will of neo-Marxists.  There's a "stridency gap" that seems to prevent conservatives from organizing along the same lines.  Well, as we see here, 15 chief financial officers of 15 of our states are threatening to withdraw funds and investments held by major banks that refuse to serve the fossil fuel industry.  This is big news!  Liberals talk often of "debanking" conservatives, i.e. making it impossible for us to lead our lives and run our businesses, because the financial world will freeze us out.  Well, now conservative comptrollers are threatening to "debank" the banks themselves!  In other words, we're finally giving the Left a taste of its own medicine.  I say: bravo!  Let's have much more of this!