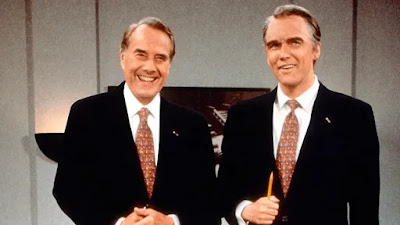 Friends, Senator Bob Dole, the Republican standard-bearer in the Year of Our Lord 1996 (it seems like several lifetimes ago), has died at the age of 98.  In more ways than one, he belongs to a different era.  He was not, as our own era demands, an ideological firebrand.  He was instead a seeker of consensus, a moderate.  He was a World War II vet, in an age when a Vietnam-era draft dodger could easily win election as President, and then re-election (to our everlasting shame)!  He was also a man, as you see here, who could laugh at himself, and that frankly is true of fewer and fewer politicians, and fewer and fewer ordinary Americans.  We take ourselves, and everything else, deadly seriously, and our outrage meters are always turned up to maximum intensity.  Above all, though, I would like to congratulate Senator Dole for having the wisdom, foresight, and dedication and loyalty to the Republican Party NOT to condemn or disown Donald J. Trump.  So many Republicans of the old guard looked down their patrician noses at "the Donald", and secretly (or not-so-secretly) aided Biden and the Democrats in 2020.  Dole, however, understood that, while Trump's style may be coarse, he still represents conservative values and policies as well as firm opposition to wokeness and socialism, at a time when our nation can ill afford to knuckle under to either.  Kudos, Bob, for staying true to your beliefs, to your party, and to your nation!

In other news, New York City is once again ahead of the curve...the curve of left-wing authoritarianism, that is.  Mayor DeBlasio, in a clear sign that he's running for Governor (!), is insisting that all private employers require their workers to be vaccinated.  That's potentially hundreds of thousands of New Yorkers, in other words, who could soon be out of work!  What a nice Christmas present, Bill...

In case you haven't heard, Devin Nunes is leaving the House of Representatives to head up Donald Trump's brand new social media conglomerate, which seems like it will be making a serious effort to compete with Twitter and Facebook.  Hallelujah!  We need to break the back of Big Tech, and fast!

If you pay attention to the mainstream media, you know by now that the lefties are publishing a lot of articles and giving a lot of breathless interviews about how exasperated they are with how "political" and "partisan" the Supreme Court has become.  In other words, when the Left doesn't get its way at SCOTUS, SCOTUS is derided as an obstacle to progress and a servant of crypto-fascism.  The Left is honestly talking as though the high court is on the verge of forfeiting its legitimacy -- and thus its authority?  I mean, they better watch themselves, or someone might accuse them of....insurrection!

Republicans are feeling VERY optimistic about 2022, so much so that the NRCC is expanding the list of House seats it will try to prise out of Dem hands, from 57 to 70!

Perhaps you've heard: David Perdue, former Senator from Georgia, has decided to challenge Brian Kemp, the sitting GOP Governor, for the Republican gubernatorial nomination.  Trump is elated!  There's a very good chance that Kemp and his handmaiden Brad Raffensperger will both go down to defeat to Trump-backed candidates.  And that's probably for the best, because RINOs aren't going to cut it in terms of policy, and they aren't going to bring out the base, either.

You already knew it, but the Biden Administration has virtually eliminated the concept of "deportation".  As a result, almost every illegal immigrant, no matter how undesirable, no matter how many crimes he may have committed, can count on the fact that the Bidenists will allow him to stay in this country.  No wonder the flood of new illegal immigrants just keeps getting worse...  There's no sign of a meaningful change in direction at the top, either.  Biden can get away with this blatant failure to enforce the law because his friends in the media turn a blind eye.  Consumers of the mainstream media, in fact, barely know that anything has changed at the border, or in the lax enforcement of immigration laws.  They don't hear a thing about it.