Save Us, Nick Sandmann -- You're Our Only Hope! 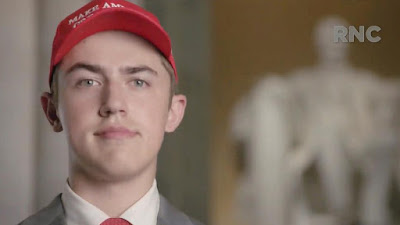 Friends, the power of the Left is founded on words, and their ability to use words with impunity to denigrate conservatives (FALSELY!) as racists, sexists, insurrectionists, fascists, white supremacists, domestic terrorists, etc etc. 99.9% of the time, they hurl these accusations, which generally have either no basis in facts, or the most tenuous basis imaginable, without any fear that they will experience meaningful consequences -- except, of course, that they will be admired by their left-wing confederates for delivering a roundhouse punch to the face of the "far right".  The exception, in case you haven't noticed, is young Nick Sandmann, who was pilloried by the media as a racist because he...stood there and smiled pleasantly while a Native American activist and a slew of black separatists tried to intimidate him.  What the media did and said was outrageous, sure, but was it more outrageous than what they do on a daily basis to more or less everyone who dares to defy neo-Marxist orthodoxy?  Somehow, at any rate, Nick Sandmann has succeeded in extracting massive settlement payments from several major "news" organizations.  And let's not kid ourselves: these race-baiting charlatans will never regret their smears, but they do, and will, regret paying through the nose when their lack of professionalism and inveterate meanness is exposed.  Long story short: whatever magic formula that Sandmann's lawyers have found to make the mainstream media pay a price for its endless lies is one that more and more conservatives need to deploy on a much wider basis.  This is one of the few ways that the MSM will ever face anything resembling accountability.  So I say: bravo, Nick!

In other news, the anticipated "red wave" in 2022 gives us an opportunity to pick up LOTS of critical governorships.  Could even New York and California be in play?  Oh, I'd like to think so!!!

The hard work of erecting a conservative "shadow economy" and "shadow culture", wherein we will be safe from cancel culture and leftist persecution, continues apace.  Truth Social -- hurry up!  We're eagerly awaiting you.

Finally, how does the Biden Administration get away with its complete failure to enforce our country's immigration laws?  Simple!  The mainstream media refuses to report on the problem.  Now, if you dare to wave a strip of leather anywhere near an "irregular migrant", the media will never shut up about it!  The border crisis itself, though?  Eh.  They're not interested.

Posted by Nicholas Waddy at 6:14 PM