The Mountaineer Who Stole Christmas 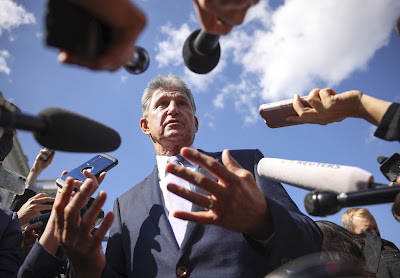 Friends, in case you've missed it, the Left is fuming.  That's because one of their own, Joe Machin of West Virginia, has finally announced his opposition to the "Build Back Better Bill", also known as the reconciliation bill, which was supposed to found several new social programs and elicit so much enthusiasm and gratitude from voters that the Dems would cruise to victory in 2022.  Well, so much for that!  Progressives are irked, to say the least.  They voted for an infrastructure bill, which most of them regarded as a gift to Mitch McConnell, on the theory that in return they would get a massive expansion of government social programs via the BBB bill.  Turns out they got zip.  Kudos to Joe Manchin, therefore, for derailing the signature legislation that was supposed to create Joe Biden's "legacy", such as it is (or would have been).  Kudos to Manchin, more importantly, for being a brake on the Dems' spendthrift madness.  America owes you big-time, Joe!

In other news, here's a great article by a friend of mine about the importance of crime in the upcoming election cycle.  The Dems ignore the public's fears re: physical security at their peril!