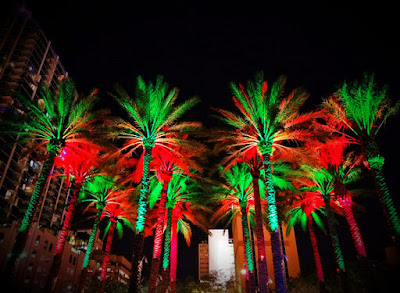 Friends, what could be more Christmasy than...Florida?  That's why I'm pleased and proud to bring you Florida Governor Ron DeSantis's Christmas message to his constituents and to the American people.  Ron is right (in more ways than one): we are truly blessed to live in a country where the free exercise of our religious beliefs is possible.  And, as Governor DeSantis points out, the celebration of Christmas in this country began way back in 1565 in the city of St. Augustine.  What a long, strange trip it's been for American Christendom, but we're still here and going strong!  Thanks be to God.

In non-Christmas news, lefties are fit to be tied, and the object of their wrath, for once, isn't Donald J. Trump!  It's poor ole Joe Manchin, whose only crime was...not to support the entirety of the left-wing agenda in the Senate.  I think that's called "using one's judgement", which is kinda what we pay all these Congressmen and Senators for, am I right?  Give Joe a break, Dems.  Or, better yet, keep giving him the finger.  That ought to speed his conversion to the GOP, for which we will thank you profusely.

So what's the Dems' follow-up to the evaporation of their hopes for the "Build Back Better" Bill?  Why, it's to talk in even more breathless tones about abolishing the filibuster and federalizing elections to "save democracy" from GOP "voter suppression".  Of course, with Manchin and Sinema regularly straying off the reservation, the chances of finding 50 votes to gut the filibuster are slim to none.  Someone should probably explain to these Dems how math works.  50 - 2 = 48!  48 < 50  Ergo, abolishing the filibuster ain't happenin'!

Here's another article by my amigo Charles Lipson.  He argues that Kamala Harris isn't the victim of racist, sexist journalism.  She's just a trainwreck of a Vice-President.

Finally, Larry Summers, a leftist Harvard economist who worked in the Clinton and Obama Administrations, is warning that runaway inflation AND a recession may both be in our future.  What???  I didn't read that in the New York Times or the WaPo.  He must be delusional!