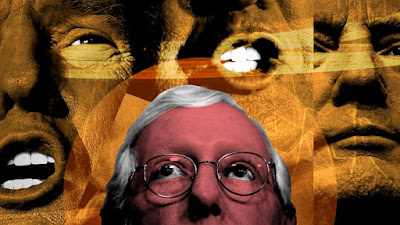 Friends, an important dynamic in the lead-up to the 2022 midterm elections will be the ongoing tension between the two most powerful figures in the GOP: Donald Trump and Mitch McConnell.  McConnell just agreed to a deal with the Dems that raises the debt ceiling temporarily.  Essentially, it gives the Dems -- who run the country, after all -- a couple months of breathing space.  Trump harshly criticized this move, which is, in fact, a retreat from McConnell's previous position.  He had argued before that the Dems should use the reconciliation process to raise the debt ceiling themselves, which is within their power.  Anyway, whether McConnell's latest move turns to be smart politics or boneheaded wimpery remains to be seen.  I personally think McConnell might be in the right.  A default on the debt would be fairly catastrophic, and arguably the Dems are doing a pretty good job of shooting themselves in the foot already.  Basically, McConnell and the Congressional Republicans are getting out of the way and allowing the Dems to finish themselves off with internecine squabbling and chronic indecision.  We'll see how things develop, but one thing is for sure: Trump will keep sniping at McConnell for the foreseeable future, since we can safely assume that neither Trump nor McConnell is going anywhere.

Here's an interesting analysis of the massive legal fees some colleges are incurring in the effort to suppress "offensive" conservative speech.  The financial situation of a lot of colleges and universities is already parlous.  One wonders whether the federal bailouts can continue indefinitely, and, if they can't, a major reordering of the priorities of higher ed may be necessary.  Among other things, a lot of woke stupidity will have to go.

It turns out the U.S. has had a small military presence on the island of Taiwan for about a year, helping to train that country's armed forces.  Interestingly, this presence started under Trump and has continued under Biden.  The politics could get messy: the PRC is extremely sensitive about Taiwan and its status as a "renegade province".  I can easily imagine the leaders of Red China going berserk over this news.

Breaking news: Justin Trudeau is a fool.  You heard it here first.

Lastly, Google and YouTube have decided to crack down on "climate denialism".  How they define that term is, of course, where things get a little iffy.  Like, if I deny that climate change poses an existential threat to humanity, am I a "climate denier"?  Well, I guess if this blog disappears momentarily, we'll have our answer!