No Time To Cry 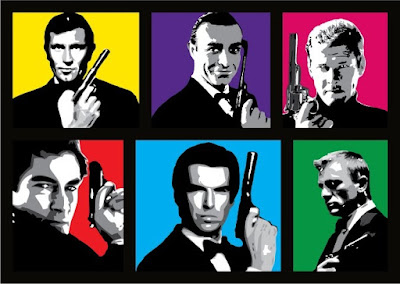 Friends, last night I saw the latest James Bond film, No Time To Die, and I'm still pondering my reaction.  I won't spoil it for you, if you haven't seen it yet, but suffice it to say that the future of the Bond franchise is shrouded in mystery.  Bond appears to have taken a turn -- in what direction remains to be seen.  For me, this is distressing, because Bond has always been something of a hero of mine.  He's the archetypal gentleman rogue: dapper, dashing, and always one step ahead of his adversaries, not to mention completely irresistible to the ladies.  In a nutshell, Bond is a paragon of masculinity, and thus it seems fitting that, in an age when masculine virtues and men themselves are under such relentless attack, Bond himself should be flailing a bit.  Even his survival is cast in doubt.  A lot of men feel similarly.  Women, especially young women, indoctrinated by the #MeToo movement and the public schools, seem to regard us as the enemy.  Boys are struggling, and are being outperformed by girls according to almost every metric (except violence, of course).  Statues of prominent men are everywhere being defaced and even toppled, wherever their subservience to the ideology of the Left is less than total.  It's enough to make any man question the wisdom, frankly, of persisting in his manhood, when the siren song of transgenderism warbles so sweetly in our ears.  I mean, all we have to do is take off our Levi's and put on a skirt, and all our problems are solved!  Presto: we're no longer dinosaurs or pariahs -- we're Heroes!  Moral exemplars!  Heralds of a New Age!  Ahh, but no.  As tempting as it is to run up the white flag and surrender my masculinity, I, for one, plan to dig in my heels and await the next Bond (with hope, if not confidence).  Even if the motif of the gentleman rogue is on life support, I implore Hollywood not to abandon it entirely.  Heck, if need be, they should wheel out my personal favorite, old Roger Moore, for one more spy caper -- prop him up in a mobility scooter, if absolutely necessary, but make his private nurse a stunner, pretty please!  Masculinity may not be what it once was, after all, but femininity still has its charms, surely.  Hey, it's the 21st century -- the Epoch of Wokeness -- so we'll take what we can get...

In other news, here's a terrific summary of the various headwinds now affecting the economy.  There's a good chance a recession is on the horizon.  Be ready.

You know inflation has started to bite when the "Dollar Tree" becomes the "Two Dollar Tree", am I right?  It's happening, like it or not...

The war between Joe Manchin, Kyrsten Sinema, and progressives is heating up!  The Left is really getting crabby.  Could outright violence be far behind?

And here's a great piece that captures the scope of the Left's war on merit, especially in our public schools.  Civilization is all about standards, my friends, and when you abandon your standards in favor of "equity", or any other phantasm, the collpase of civilization will soon follow.

Posted by Nicholas Waddy at 3:03 PM