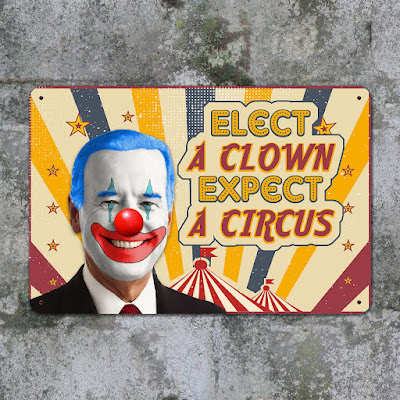 Friends, today you get an extra large helping of Bidenism -- it must be your lucky day!

First, and most importantly, we need to reflect on just how far the mighty have fallen.  Jen Psaki is doing her best to provide some cover for Sleepy Joe, naturally.  Know who she blames for his slippage in the polls?  Not Trump, surprisingly, but...the unvaccinated!

Don't be so hasty, Jen.  The unvaccinated are easy marks -- convenient scapegoats for your abysmal policy and leadership failures.  You might want to keep them around as cannon fodder for as long as possible...

Pollster John McLaughlin feels that President Trump would win in a landslide, if the 2020 election were rerun today.  I think he's right that Trump would win, but no one should kid themselves: Trump is riding high, relatively speaking, right now because the establishment machine isn't trashing him 24/7, and nor is it covering for Joe Biden with the same fastidiousness as it once was.  It's one thing to be ahead in the polls when there's no election on offer.  It's another to be ahead on election day!  Still, public opinion has taken a decidedly Trump-ward turn, and that's good.

SNL is acknowledging Sleepy Joe's fall from grace, although it's clearly hopeful that Biden can recover his "lucidity" in time to push the progressive agenda forward.

Given Sleepy Joe's cratering popularity, it's no surprise that he's less and less available, both to the media and to the public.  As his, err. lucidity deteroriates, moreover, we can expect him to "show up" less and less.  He'll spend a lot of time sequestered in Wilmington.  Is this a good look for the Dems?  A confused, inarticulate octogenarian president who increasingly never leaves his basement?  Probably not...but it may be better than the alternative: all Biden, all the time!

The only good news for Uncle Joe?  He's not a "white supremacist", even though his hand gestures are every bit as Klan-ish as Donald Trump's...  Luckily, it's cute when Biden does it.

Finally, here's an eloquent statement by a prominent black Republican who opposes the racism inherent in CRT.  Ken Blackwell can go far in the GOP, if he's of a mind to...

Posted by Nicholas Waddy at 4:05 PM