Is It Time for Crazy Nancy To Retreat to Her Crypt? 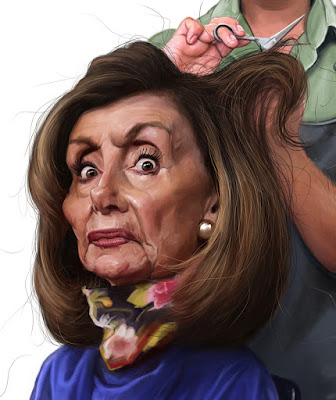 Friends, many of you have been wondering for years now how the reanimated corpse of Nancy Pelosi has managed to transfix and tyrannize Washington, D.C so effectively.  Witchcraft, one assumes.  Now, though, old age may be catching up with Crazy Nancy -- or maybe it's just political reality?  There are rumors that she's considering resigning as Speaker of the House in the very near future.  That's one of several important topics that Brian O'Neil and I cover in this week's Newsmaker Show.  We also talk about the airlines' retreat from vaccine mandates, the potential for third party candidates to make waves in 2024, Superman's subordination to wokeness, and the future of the James Bond franchise.

When we turn to history, Brian and I analyze the effects of the Red Scare in Hollywood (and the long-term conquest of Hollywood by neo-Marxists), the surprisingly negative consequences of the ouster and execution of Muammar Qaddafi, and the fateful failure of the Nationalists in China in their efforts to snuff out the Communists in the mid-1930s.

In other news, "President" Biden's approval ratings are plummeting to new record lows, and his standing in key Senate battleground states is even worse.  Take note!

Trump boasted long ago that he would be creating his own social media platform to rival Facebook and Twitter.  Well, he's taken his time about it, but it looks like he's finally swinging into action!  Bravo, Trump!  We conservatives are active on many platforms, including upstart alternatives like Parler, Telegram, etc., but I personally think there's a profound need for a go-to conservative social media site that can build real critical mass and change the tech landscape for good.  Only Trump, in all likelihood, is capable of achieving this.  I might add that, if he does it right, he'll be in a position to profit big-time.  I hope he does.  And I hope Facebook and Twitter take it on the chin.

Don't believe everything you hear, but some anonymous sources are claiming that Joe Manchin is considering departing the Democratic Party.  That would be a smart move, assuming he wants to win reelection in the great state of West Virginia.  The more pressing question, though, is: who will he caucus with in the Senate?  Just because he becomes an independent, say, doesn't mean he'll cease to vote with the Dems when it counts.  We'll see.  Maybe none of this will come to pass anyway.

Finally, you knew it was just a matter of time: Thomas Jefferson is now on the cancel culture chopping block.  George Washington will be next.  Don't be surprised if they move on to progressive icons like FDR and JFK eventually.  Yeah, they were useful to the Left, in their day, but the Bolshies have moved on, and every dead white male is now suspect.  That's the sad and simple truth.

Posted by Nicholas Waddy at 9:56 PM