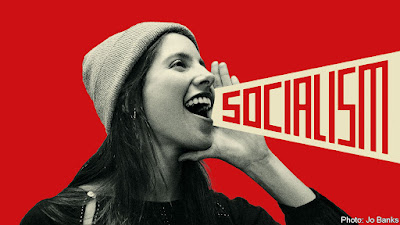 Friends, you heard it here first.  Actually, you've heard it a million times, but you definitely heard it here again: the Democrats are covertly leading us to SOCIALISM!!!  It's the agenda that lies behind their $3.5 trillion reconciliation bill: expand government relentlessly until so many Americans are dependent on government that voting for Republicans, or cutting federal spending, will both be unthinkable.  And they may be getting close to achieving their goal!  A good friend of mine sheds light on this dynamic in this fine article:

Will the blasted bill pass?  This article discusses how remarkable it is that Nancy Pelosi failed to get the House to vote to approve the infrastructure bill last week.  Rarely is she stymied by her own caucus.  You'll note, though, that, despite the fact that this article comes from Fox News, it clearly is rooting for Pelosi and the Democrats to succeed in passing the bill, in the final analysis.  Scary!  Following that is another article signaling that Joe Manchin may be willing to compromise on a number somewhere between $1.5 trillion and $3.5 trillion.  That's probably the only way that the Dems get this deal done: they lower expectations.  Can they settle for Bolshevizing America at a slightly slower pace?  We'll see.

Attorney General Merrick Garland is asking the FBI to look into threats of violence, and acts of violence, against teachers, school administrators, and school board members.  Republicans and conservatives are crying foul, portraying it as an effort to silence dissent on issues like masking and critical race theory.  A lot depends on the details.  Surely, there are some right-wing (and left-wing) nuts who pose a threat to school officials.  On the other hand, citizens have a right to air their grievances and ask questions.  Can we find a middle ground?

Meanwhile, poor Kyrsten Sinema is still getting harassed on a daily basis by lefties who insist that she vote to pass the wretched reconciliation bill.  Boy, is her mettle being tested, or what?

Polls are showing a real turn in the direction of the GOP.  For one thing, the public is taking a fresh look at DJT, and they're liking what they see...or at least they're liking Trump more than they have in the past.  They're also looking askance at Sleepy Joe.  No surprise there.  Here we also see a generic ballot poll from a notably left-leaning pollster that has the Republicans ahead!  That's an outlier, at this stage, but it's worth mentioning that few MSM pollsters saw the GOP waves coming in 2010 and 2014.  If pollsters are getting close to seeing 2022 as a "draw", you can bet that the truth is that the good guys are surging ahead!