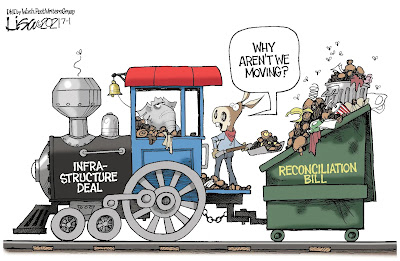 Oh boy!  What a big news day, friends.  Lots to share with you.  For one thing, the Dems think they're getting close to a deal with moderates and progressives that will allow them to pass the $1 trillion infrastructure bill AND the new-and-improved $1.75 trillion reconciliation bill.  Are they really approaching consensus, or are they just trying to make it sound as if they are?  We should know soon.

Complicating their efforts is a discernible slowdown in the economy.  We're down to 2% growth -- so, an Obama-style "recovery".  Economists seem optimistic that growth will pick up again in the fourth quarter.  Maybe.  A lot depends on whether the current funk that the American consumer is in lifts.

New Yorkers, buckle up!  You thought Kathy Hochul was bad?  Try Letitia James on for size.  She appears to be gearing up to run for Governor.  Now, she's been promising to make DJT's life miserable by indicting him for...you know, all those countless crimes he's committed.  Doing so would be a GREAT way to fill out her resume as she runs for Governor, no?  Expect her efforts at adversarial prosecution to kick into high gear.

New Yorkers, you have a little good news today to balance out the bad.  The self-declared socialist running for Mayor of Buffalo is struggling in the polls.

"Election interference" comes in many forms, and according to this poll most Americans assume that the efforts by the media and Big Tech to suppress (true) stories about Hunter Biden before the 2020 election fit the definition.  Damn straight!  Twitter even apologized for its campaign against the New York Post.  You can bet your bottom dollar, however, that, if they have the opportunity to cover for the Dems again right before an election, they won't think twice.  That's why it's such good news that no one watches CNN!

As you probably know by now, the Governor's race in Virginia is nip and tuck.  Well, Donald Trump is hinting that he'll be campaigning in Virginia soon.  That would be a bombshell development, because one assumes that it would be a dream come true for the Democrat Terry McAuliffe, who desperately wants to run against Trump (who isn't beloved in the Old Dominion) instead of Glenn Youngkin.  In short, an appearance by Trump would be an early test of whether Trump is a help or a hindrance to Republicans in off-year elections.

It's official: your U.S. passport can now list your gender as "X".  My guess is that the transgender crowd will spend about five minutes celebrating this "victory", and then they'll start wailing about how "X" just doesn't capture the majesty and uniqueness of their myriad gender identities.  If my gender is "Rick James impersonator with one leg", then by golly I want that on my passport!!!

You've heard that Biden's approval rating is down.  This article makes the case that his standing with the public is even worse than it seems, insofar as those who support him do so tepidly.  It's a good point.  Victory and defeat in 2021 and 2022 will come down to enthusiasm, and the energy sure seems to be on the right at the moment!

Finally, in Big Tech news, Google is making money hand over fist.  No surprise there.  Google rules the universe, after all.  Even this blog is a Google product.  (Pardon me while I vomit.)  I offer you another fine article that argues that social media companies' efforts to censor conservatives are actually a sign of desperation.  These leftist ideologues are trying to control a narrative and a public sphere that long ago slipped out of their grasp.  We should, perhaps, view their ham-fisted efforts at thought control as a blessing in disguise, and as a sign that they know their goose is cooked.  And, finally, in the last article you'll see that Facebook has rebranded itself as "Meta".  Wow!  Facebook is one of the most successful companies/platforms that's ever existed, so why give up the name?  Presumably because, while everyone uses Facebook, few people like it, and even fewer trust the nerds-with-an-attitude who run it.  Meanwhile, Mark Zuckerberg has a bee in his bonnet about building the "metaverse", which is some kind of augmented internet that I don't begin to understand.  Bottom line: Mark Zuckerberg is a meta-dork and a left-wing scold whose best days are behind him.  When Republicans retake control of Congress and the presidency, I expect Facebook to be torn asunder.  It can't come soon enough!

Posted by Nicholas Waddy at 5:06 PM