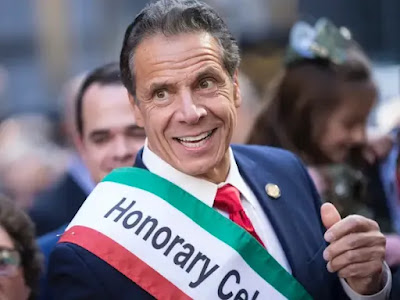 Friends, Italian-Americans have experienced the peaks and the valleys of what America has to offer.  Lately, mostly the peaks.  At first, mostly the valleys.  Still, they never lost sight of all that this country has to offer, and they never whined and moped about their misfortunes.  They "got on with it" and made the best of life in the greatest country on earth (not too hard, when you think about it).  Now, though, their trademark holiday, Columbus Day, is under assault.  I guess being Italian-American just isn't PC enough these days.  Heaven knows it isn't a "protected class"!  Anyway, if you've ever wondered how Columbus Day came to be, read all about it here:

Are the Dems in bad shape, according to the polls?  Yes!  Could they be in even worse shape than the polls indicate?  Double yes!  Check it out:

You thought 15,000 Haitians made a mess?  There are a lot more on the way, so our border headaches are only beginning, sad to say.

Add LEGOS to the list of toys you don't want to buy for your kids and/or grandkids this Christmas.  In fact, play it safe and avoid the major toy retailers, and toy manufacturers, altogether.  Buy vintage toys!  Or, better yet, buy little Johnny and Susie a broom and a mop (respectively) and put them to work.

So voter fraud doesn't exist, right?  It's all part of the "Big Lie"?  Well, of course it exists.  Here's a story that proves it.  The question is whether it exists on a scale sufficient to determine the outcome of a close election.  Maybe.  Personally, I think the bigger scandal in 2020 was the hundreds of thousands if not millions of votes cast and counted in violation of election law.  That's "fraud", if you ask me, because every illegal vote that's counted dilutes the impact of legal votes.  There's no question in mind that, from this perspective, Joe Biden's 2020 win was illegitimate.  Based on the Rasmussen poll you see below, most Americans agree.  Note that the poll asks about "cheating" -- a vague, umbrella term for electoral shenanigans, many of which the Dems engaged in.  Heck, the Trump-Russia hoax was one big effort to undermine our electoral process, and its legitimate outcome: the presidency of Donald J. Trump!

Finally, there are worrying signs that the U.S. could be flirting with a recession.  In particular, the mood of consumers has turned strongly negative.  Given all the other headwinds we face economically, don't be shocked if we get a taste of that "stagflation" that everyone's talking about in 2021 and 2022.  That doesn't mean the inflation will be horrific, or the economic contraction will be long and deep...but all that remains to be seen.