The Barbarians Are At The Gates 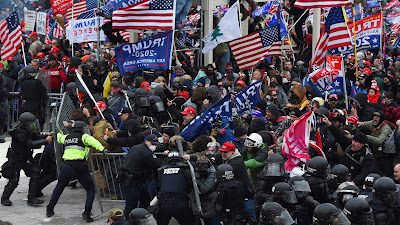 Oh yes, those wild-eyed barbarians are threatening to topple civilization once again, as is their wont, but it's their identity that might surprise you: why, it's YOU, dear Trumper, who's the problem -- who's hammering the final nail into democracy's coffin, in fact!  That's the narrative that's being pushed day in and day out on CNN and MSNBC: vicious, mentally deranged Trumpers are constantly conspiring to overthrow our Republic, trampling underfoot all that's good, decent, and true.  That's why we need to get to the bottom of what really happened on January 6th, of course.  We need to expose how Donald Trump, Steve Bannon, Tucker Carlson, and Mike Lindell formed a secret, traitorous cabal, which hatched a sinister plan to beat every member of Congress to death with rolled up posterboard.  And that was just "Phase One"!!!

The sheer absurdity of the "insurrection" hoax, and its political uses, are one of our main topics on this week's Newsmaker Show.  Brian and I also cover the decline and fall of ISIS, the prospects for a January 6th special prosecutor, the Dems' pathological addiction to runaway government spending, Trump's bold new initiative to create a social media empire, and the growing rift between Joe Biden and Kamala Harris.

When we turn to history, Brian and I discuss the legacy of Theodore Roosevelt (who wasn't always "conservative" in the modern sense), the complex maneuvers that ended the Cuban Missile Crisis, the expansion of the U.S. prison population in the 1980s and 90s (and how it successfully brought violent crime under control), and the slow demise of the American-made, gasoline-powered sedan.

Here's the article I referenced in the interview about the growing rift between Biden and Harris.  There's trouble brewing in the workers' paradise, folks!

And here are the latest polls in the all-important race for Governor in the Commonwealth of Virginia.  Virginia is a blue state, so the competitiveness of the GOP candidate is very good news.  A win, of course, would be better news.

And check out this shocking poll.  If you read between the lines, and these days you need to develop that ability, a majority of Americans now have doubts about the legitimacy and accuracy of the 2020 election results, as they should!!!  Democrats remain confident about our election infrastructure in 2022 (despite rampant "voter suppression"), but I have a feeling their attitude might change once they lose!