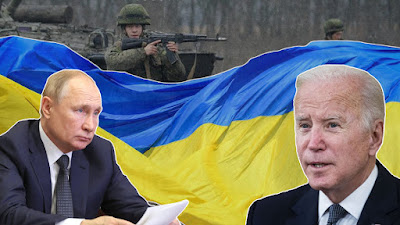 Friends, today I bring you another very special treat: a guest essay by our very own Jack Stengel.  Jack is well known in these parts as the Bard of the Southern Tier.  He's articulate, his knowledge base is encyclopedic, and his adamantine conservative convictions put us all to shame.  Let's see what he has to say about the current brouhaha over an impending (?) Russian invasion of Ukraine...  See if you agree with his POV.

I think here are two fundamental certainties in this situation: 1. Russia will never tolerate what it may in the near future regard as the CERTAINTY of Ukrainian membership in Nato. It need not be formalized; if Russia is convinced it's a done deal it will commence decisively intended military action.  2. Nato has a very favorable defense for Central and Western Europe in place already. We do not need Ukraine for that and we must not let sympathy for ethnic Ukrainians motivate us to present Russia with an unendurable affront.
As to #1: One of monstrous and amoral Stalin's main reasons for enslaving the subsequent Warsaw Pact nations was to provide a barrier to invasion for a Russia which had just suffered the worst incursion ever suffered by a country at the hands of another. Now Nato encompasses that barrier, including Poland, an historical invader and victim of bordering Russia. Consider Russia's deep historical ties to Ukraine, its prototypical heartland (Kievan Rus) and in that sense perhaps roughly analogous to Mass. or Va. for us. I understand it is customary in Russian weddings to visit the WWII memorial treasured in every city and town. Much of that deadliest of all wars was fought in and for Ukraine. Because it has done the world much evil we may be loath to sympathise with Russia but we MUST objectively perceive how they view their present position! Russia has displayed remarkable restraint in reacting to Nato's eastward advance after the fall of the USSR. I was born in 1947 and this is still almost beyond belief to me, especially when considering that Nato's anchor is an incredibly united Germany. But Ukraine in Nato? Surely Russia cannot BUT react forcefully to such an egregious (in their eyes) offense.
As to #2: Is it worth our taking that chance? Is it of vital interest to the security of the West that Ukraine be incorporated into our alliance? When the USSR unwisely placed nuclear IRBMs at our very threshold in Cuba in 1962 we came within a day of invading Cuba and engaging Russian forces we now know had tactical nukes and local authority to use them. Russia would surely hazard the same should Nato bring Ukraine into its fold.
Nato sits atop the northern European plain - great tank country - all the way to Russia's border itself. Nato need not withdraw from any present position in a member country. It need not give Putin the "legally binding" agreement he wants that Nato will not welcome Ukraine. But Nato should, led by the US, at least through informal channels, assure Russia that Ukraine will not be admitted. Without such an assurance Russia may believe that Ukrainian membership is in the works. Whether mistakenly or, worse, realistically, seen as so by Russia, then the abyss yawns! Such an informal deal on US IRBMs in 1962 helped to defuse the Cuban Missile Crisis. Should Russia invade Ukraine on its own again, sans any reason to think Ukraine in Nato is imminent, then sanctions may well be appropriate.
Russia will never countenance the accession of the historically and geographically vital Ukraine to an alliance obviously aimed at Russia. It would be exceedingly dangerous to ask such a humiliating concession from this proud and rugged nation!

Posted by Nicholas Waddy at 6:33 PM