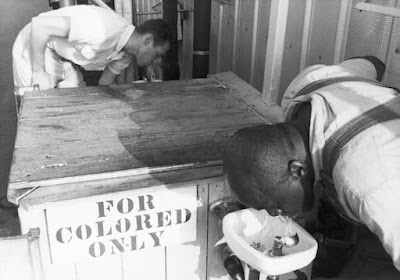 Friends, today our "President" made it clear that, in his eyes, the Supreme Court of the United States is a segregated amenity.  That is, the upcoming vacancy on the high court has been designated as "for black women only".  This ought to disgust and mortify any American who believes in equal treatment and equal opportunity, needless to say.  De facto demographic tunnel vision in hiring has long been a feature of political appointments at the federal level, of course.  I remember back when President Bill Clinton chose a white woman to be his Attorney General.  Well, she went down in flames, so he picked another white woman...and she too was a dud.  So naturally he picked...another white woman: Janet Reno.  Granted, Reno was a woman only by courtesy, but Clinton clearly had decided that the Attorney General's office occupied a specific niche in his diversity portfolio, and he wasn't going to budge, come what may.  Now, President Biden has made this sort of prejudiced thinking, totally beholden to "identity politics", explicit and overt.  And shame on him for doing it!  Hopefully many Americans will be disgusted by this brazen act of employment discrimination, and they will respond accordingly: by sending the Democrats packing in November.  Unfortunately, though, it's highly likely that Biden's chosen nominee will end up on the Supreme Court.  That's beyond sad.  It's tragic.

Speaking of those race-obsessed lefties, see what this indignant member of the Virginia House of Delegates had to say:

Did you hear?  Denmark has decided, despite the omicron surge, to terminate ALL of its COVID restrictions.  Wow!  Given what happened in the U.K., this is now officially a trend.  Will it eventually reach American shores???

Finally, SNL is famously irreverent towards American Presidents, but -- and this will surprise precisely NONE of you -- it has mostly pulled its punches when it comes to current "President" Joe Biden.  Admittedly, SNL has started to make fun of Sleepy Joe a teeny tiny bit, which is progress, but its overall strategy is clear: insulate the Bozo-in-Chief as much as humanly possible from anything resembling criticism.  And you thought the point of SNL was to be "funny"?  Ha!

Posted by Nicholas Waddy at 9:11 PM