CATS! Coming Soon to a School Near You 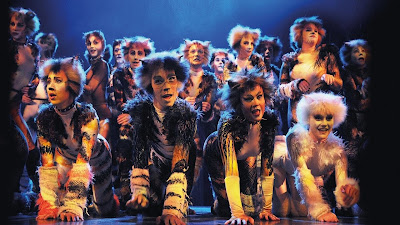 Friends, do you often find yourself wondering whether you've taken a wrong turn and entered a parallel dimension, in which up is down, right is wrong, and the Democratic Party platform masquerades as "common sense"?  Well, don't discount the possibility that you may be right!  Witness this story, about a substitute teacher fired because she reacted with befuddlement (and mockery) to a student who insisted on being "identified" as a cat.  Yes, you heard that right.  Male and female aren't the only choices on your menu anymore, folks!  You don't even have to settle for homo sapiens, in fact.  The sky's the limit!  And anyone who doesn't play along is, naturally, the scum of the earth.

In other news, the People's Republic of Australia has finally decided to deport tennis star Novak Djokovic, on the theory that his unvaccinated status might encourage anti-vaxx sentiment.  I must say, their logic holds up rather well: if you let even one person dissent, others may feel emboldened to speak their minds and follow their hearts too -- and we can't have that!

Glenn Youngkin has been sworn in as Governor of Virginia, and we here at WaddyIsRight are officially tickled pink!  Congrats to Youngkin and to the good people of the Commonwealth of Virginia, who have long deserved better than demi-socialist misrule.

The battle over the future of Minority Leader Mitch McConnell continues to rage in the Republican Party.  RINOs like Mitt Romney adore him.  DJT continues to trash him.  In the meantime, McConnell is doing great work in blocking the Dem agenda in the Senate and building bridges with moderate Dems like Manchin and Sinema.  If the GOP retakes the Senate in 2022, though, McConnell may well have to go hat in hand to Trump and ask for forgiveness for some of his past statements.  Otherwise, the Republicans in the Senate will need to look elsewhere for leadership -- and would that really be such a bad thing?

Few lefties are more passionate and (devilishly) persuasive than Robert Reich.  I met this little Marxist troll once upon a time.  He didn't impress me, but the simple fact is that his artful demonization of Republicans, conservatives, and Trumpers is having a profound, if thoroughly toxic, effect on millions of our countrymen.  Take this article, for instance.  Reich pivots from condemning Republicans in Congress as "seditionists" to accusing any corporation which doesn't support the Democrats EXCLUSIVELY as seditionist too.  Sure, we all know that corporate America leaned heavily left in 2020, and in fact $400 million from Mark Zuckerberg was almost certainly the difference in the election, but to Reich that's not even close to good enough.  Corporate America must renounce the fascistic GOP entirely, or else it risks incurring the wrath of the progressive mob.  Corporate fat cats, you've been warned!

Speaking of corporate America and its anti-GOP, anti-Trump bias, President Trump, in his recent Arizona rally, drew attention to AT&T/DirecTV's decision to stop airing One America News.  Luckily, cable is slowly dying and most of us can access the news we prefer online, but the efforts to silence conservatives continue nonetheless.  They are insidious and unAmerican!

Posted by Nicholas Waddy at 3:19 PM