The BLM President Stays True To His Roots 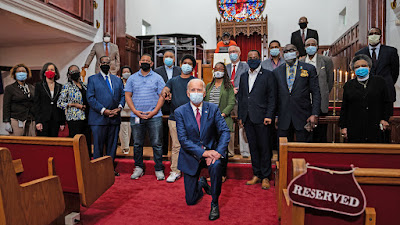 Friends, when the BLM-inspired protests/riots gripped the nation in summer 2020, most Democrats couldn't take a knee fast enough, and candidate Joe Biden was no exception.  If there's one demand that BLM kept insisting on, moreover, it's that America needs go beyond non-racialist, gradualist solutions to racial inequality, and instead we need to take measures that actively discriminate on the basis of race to advance the standing of African-Americans (because the standing of other minorities doesn't interest BLM in the least).  Biden's campaign promise to install a black woman on the Supreme Court was very much in line with this sort of thinking.  Now, unsurprisingly, "President" Biden is following through on his pledge: he's not even considering any candidates for SCOTUS who don't pass his racial/gender litmus test.  We shouldn't be shocked, therefore -- unless, that is, we're appalled that America elected a bigot like Biden in the first place.  That is a trifle mortifying, if we're to be honest.

Anyway, along these lines, I decided yesterday to modify my blog post about Biden and SCOTUS and submit it to Townhall.  And...voila!  Hope you like it.

Speaking of race, what's the easiest way to lambast your enemies and assail them with a baseless charge of "Racism!"?  Well you may ask.  Just change the definition!  The Anti-Defamation League is on the case.

Here is a rather long, but very well-informed, analysis of the controversy swirling around Joe Rogan, who leftists badly want to censor.  The argument here is essentially that censorship and cancel culture are bound to get worse before they get better.  I tend to agree.

Well well!  We already knew that "President" Biden was unpopular, but is it time to impeach him?  A surprising number of voters say yes.  Impeach him for...what exactly?  Most voters probably don't care.  They equate impeachment with a severe censure of a public official who they don't like.  The prospect that he would actually be tried and removed from office must seem extraordinarily remote.  Sadly, that likely will be the pattern re: impeachment for the foreseeable future: we'll have impeachments galore, but none of them will amount to a hill of beans, except in terms of public opinion...