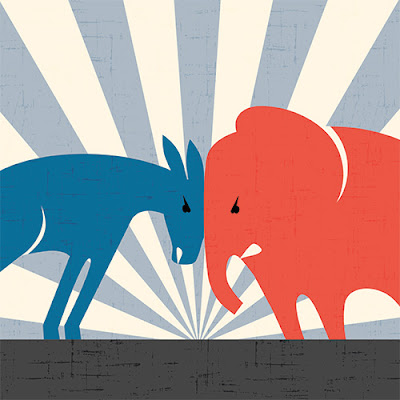 Friends, my latest article discusses in stark terms just how close America came to forsaking pluralistic, multiparty democracy in 2020-22.  It isn't because of the inveterate "fascism" of Donald Trump, either.  It's because of the electoral success of Democrats, and the determination of Democrats to refashion the ground rules of democracy to their (permanent) advantage.  The recently defeated election takeover bills were just one arrow in their quiver.  So, yes, we've held the barbarians at the gates.  That's the good news.  The bad news is that they're still swarming the ramparts, and sooner or later they may well get the chance to wreck our democracy once and for all.  Beating them decisively in 2022 and 2024 gives us our best, and possibly our only, hope of avoiding that miserable fate.

Read all about it at World Net Daily!

Conservatives are celebrating the defeat of the Democrats' “voting rights” bills on Capitol Hill. They ought to, since these bills were a brazen attempt to federalize election administration, in clear violation of the Constitution, which gives power over elections to the states, and they would have watered down election integrity safeguards to a level that most genuine democracies would find laughable – or alarming. We can thank our lucky stars that Democratic Senators Kyrsten Sinema and Joe Manchin stood up to a storm of abuse from members of their own party and did what they felt was right for our nation. As a result, the filibuster, and our electoral norms, live on, even if both grow more shopworn by the day.

Our celebration of this victory, however, should be tempered by a realization of how close we came to a mammoth defeat. Sinema and Manchin's votes were only determinative of the outcome because the Democrats failed to win an outright majority in the Senate in 2020. Instead, Democrats and Republicans both have 50 votes in the chamber.

Had the Democrats won more robust majorities in both houses, it's a foregone conclusion that their election takeover bills would have passed – and, in fact, Democrats probably would have been emboldened to make them more ambitious, which is to say more imperious and dismissive of state authority. Only the Supreme Court would have stood between one political party and its complete domination of the rules of the game of American politics. We know that the Democrats would have rewritten those rules to make the detection and deterrence/punishment of election fraud and election law infractions virtually impossible – since, from their perspective, it's a racist myth that violations of election laws occur in the first place. Democrats would have ensured that everyone was registered to vote, and that every voter received a ballot in the mail regardless of whether they wanted one or not. And, undoubtedly, most of that veritable mountain of ballots would have found its way back to counting rooms in boards of election across the country, regardless of who filled them out, making it difficult, if not exactly impossible, for Democrats ever to lose an election again.

Had the Democrats possessed the safe majorities in the House and Senate that we talked about above, though, the transformative changes to our government would only have begun with election law reforms. Democrats want to add additional states to the Union – all of them, needless to say, reliably blue – giving them permanent, guaranteed control of the Senate. Democrats want to ramp up federal gun control laws, imperiling our Second Amendment rights. Democrats want to expand government intervention in health care to the point where the distinction between a public and private system – between socialized medicine and free market medical care – becomes largely academic. Democrats want to use the FCC, woke social media companies, and speech codes on college campuses to censor and silence conservatives. Democrats want to unseat members of the opposition party in the House and Senate and exclude them from running ever again in federal elections. Worst of all, Democrats in increasing numbers favor packing the Supreme Court to ensure that a majority of Justices will blindly support whatever further authoritarian measures progressives deem expedient. That would eliminate any check on the ability of Democrats and liberals to impose their will on the American people.

All of these horrors, which, in sum, really would amount to the extinguishing of American democracy, could easily have come to pass – if only Democrats had been a little more successful in the 2020 elections than they were. In other words, in 2020, we survived the effective end of competitive, multiparty, pluralistic democracy by the slimmest of margins...but not for the reason that the partisan January 6th Committee claims.

Conservatives should celebrate our historic victory over Democratic schemes to manipulate our elections, therefore. But we should also be thoroughly chastened and downright horrified by the fact that the opposing party has warmly embraced two very dangerous ideas: one, that the GOP has lost all legitimacy and is a racist, sexist, fascist cabal, “a dagger at the throat of America”; and, two, that the overturning of virtually any past democratic norm and/or constitutional principle is justified in order to prevent Republicans from retaking power.

It doesn't take a genius to intuit where such views can lead: to tyranny and oppression. And they will lead us there, and in record time, unless the Democratic Party is defeated in 2022 and 2024. With any luck, those defeats would force Democrats to rethink their extremism and their betrayal of American and Western political traditions, and to return to some version of democratic normalcy.

Think of it this way: just a few years ago, Republicans controlled the House, the Senate, the presidency, and the courts, including the Supreme Court. Despite possessing that kind of sweeping power, they never seriously considered radically transforming the ground rules of our democracy. They supported the filibuster, even though it inconvenienced them, and they bowed respectfully to the edicts of the Supreme Court. They accepted, in short, that even a seeming monopoly over the levers of federal power does not convey unlimited authority or permanent dominion.

Now, a few years later, the Democrats show no such restraint. They are a party bent on entrenching itself in power and eliminating the opposing party as an effective political force.

That is why they must be beaten at all costs.

In other news, Virginia's new Governor is attempting to redefine "diversity, equity, and inclusion", and among the changes he hopes to make is deemphasizing race and replacing "equity" with "opportunity".  This is a welcome change in tone, but one has to wonder whether any of the "diversity" professionals out there will take any notice.

New York City is turning its back on Teddy Roosevelt.  No surprise there.  The only question is when Franklin Delano will bite the dust too!

Our old friend Robert Reich is in hot water because of his fierce rhetoric targeting Senator Kyrsten Sinema.  Poor Bobby.  I just hate to see such a nice guy besmirched...

The lasest Trafalgar poll contains oodles of bad news for the Dems, including an almost 14-point deficit in terms of the generic ballot question.  Ouch!  Do I believe that margin will hold?  Not a chance.  Do I believe the Dems are in big, big trouble in 2022?  You better believe it!

Finally, natural immunity against COVID has been deprecated by Democratic politicians and the scientific/medical experts alike, because, as you may have heard, nothing matters but those precious vaccinations.  Well, now it appears that natural immunity is arguably superior to vaccination when it comes to battling the delta strain of COVID.  My guess would be that omicron is even more vaccine-resistent.  That doesn't make vaccines useless, of course, but it does limit their usefulness, and it makes our discrimination against COVID "survivors" positively absurd.

Posted by Nicholas Waddy at 7:32 PM