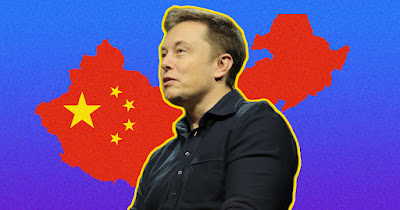 Friends, the world's richest man might seem like an unlikely cheerleader for Maoist tyranny, but these days commerce makes for some strange bedfellows!  My latest article, soon to appear at American Greatness, takes Elon Musk's electric carmaker to task for its "see no evil, hear no evil" policy re: potential genocide in China's mostly Muslim Xinjiang province.  Sorry, Elon -- I calls 'em as I sees 'em!

Elon Musk: Leading Candidate for Slave-Driver of the Year?

Many conservatives cheered Elon Musk's recent recognition as Time's “Person of the Year”, especially since Musk has been outspoken in refuting pandemic orthodoxies, criticizing big government, and even brazenly insulting “Uncle Joe” Biden. Musk's willingness to speak freely and think outside the box, in an age of cancel culture and rampant censorship, is laudable, but his business practices often leave much to be desired. And Musk is, lest we forget, a businessman, first and foremost. His leading-edge tech companies are among the world's biggest and most influential.

In addition to relying heavily on government largesse and dodging tax obligations that mere mortals like you and me have no choice but to pay, Musk and his companies are under increasing pressure because of his and their cozy relationship with communist China. Recent articles have exposed how deeply invested Musk, Inc. is in Red China, and how extravagant Musk has been in his praise of China and its leadership.

On one hand, none of this should come as a surprise. Since the toppling of President Trump and his replacement with Washington insider par excellence Joe Biden, our political, cultural, and economic elite has distinguished itself by its fecklessness and its indifference re: China's misdeeds.

For instance, despite the fact that it is increasingly obvious that the Wuhan virus was engineered in a Chinese government-run lab, and accidentally or intentionally released at the cost of millions of lives worldwide, and untold trillions in damages, few Western leaders have been willing to call out the Chinese for their role in the catastrophe, and their shamelessness in denying responsibility – not to mention their propagation of conspiracy theories to shift the blame elsewhere.

Meanwhile, the Biden Administration has mostly kept promises to deescalate America's trade war with China, and major media organizations, social media companies, and big corporations like Disney, Nike, and Coca-Cola have been toadying to the Chinese communist elite and shielding them from criticism. In this day and age, therefore, the coddling of Red China is not the exception, but the rule, and that's throughout the Western world. Musk embodies this pernicious trend perfectly.

The most recent sign of Musk's tone-deaf approach to Chinese outrages is the decision by his electric car company, Tesla, to open a showroom in China's Xinjiang province. This is the same province now legendary for an allegedly genocidal, and certainly cruel and tyrannical, government program to intimidate, reeducate, and even enslave the local Muslim population.

China's violations of human rights in Xinjiang are so flagrant that the U.S. Congress recently voted, on a bipartisan basis (!), to adopt Senator Marco Rubio's proposed ban on the importation of goods produced by forced labor in Xinjiang. President Biden, surely no enemy of Red China, even deigned to sign the bill into law.

Musk, however, and his avaricious electric car company, see only dollar signs (or is it yuan signs?) in Xinjiang. And so, for Musk, it is business as usual as he looks the other way and profits indirectly from Chinese communist barbarity. And it isn't the first time, by any means. Tesla and its suppliers have been accused of benefiting from slave labor in China and elsewhere before.

Considerations like these place in a new and troubling light Elon Musk's supposedly irresistible impish charm. Musk may well have the world of commerce on a string, and he may have dazzled much of the global elite with his faux-nerdy magnetism, but the bottom line is how real human beings are impacted by Musk's technologies and his business practices. In Xinjiang, at least, it appears that Musk is part of the problem, and is in no way part of the solution.

More and more, American consumers are asking themselves whether the capitalist enablers of communist rule and Maoist oppression are people we want to do business with – and whether it's necessary to build every vital piece of modern tech in the world headquarters for slave labor and genocide. If you believe the answer is an emphatic “no”, then think twice before you buy a Tesla, or hitch a ride on the next SpaceX rocket.

Actions have consequences, after all – for Musk no less than for you and me.

Posted by Nicholas Waddy at 4:05 PM