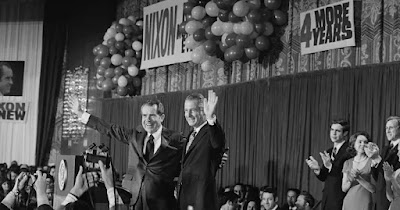 Friends, I think we can all agree that American democracy peaked with Nixon-Agnew's 49-state landslide victory over McGovern-Shriver in 1972.  Since then...eh.  We've been limping along.  Now, though, the denouement of American democracy is gathering pace.

Witness the flurry of alarmist articles from leftists below.  In shrill, panicked tones, they declare that our constitutional system is on its last legs because of Republicans' "deceitful and violent effort to end American democracy".  Only David Brooks injects a note of rationality: he points out that a lot of Democratic talking points are focused on matters like voter ID, which survey after survey show has little effect on voter turnout or the outcomes of elections. Brooks, though, finds the efforts of Republican legislatures to take control of election administration and the certification of election results deeply troubling.  He needn't.  State legislatures and Governors have always had important powers over our elections.  Almost never do they exercise those powers to try to influence the outcomes of the electoral process.  And, lest we forget, none of them did so, or tried to do so, in 2020.  That's because what undergirds the integrity of our elections is not the laws and procedures that govern them, but their widely heralded legitimacy, and the force of public opinion, which, up until now, has seldom doubted that the person who gets more votes is the rightful winner of any election.  What's different about America in the 21st century, however, is that suddenly neither party has real confidence in the electoral process -- and thus the true believers in both parties claim (with a straight face) that the opposing party is gaming the system, at best, and subverting democracy itself, at worst.  Ergo, it is just a matter of time before one of our parties contests an election more successfully than Trump did in 2020, and at least some state legislatures, judges, and Governors actively participate in a "scheme" to overturn an election.  And then all this handwringing about the fate of "American democracy" will seem a lot more relevant than it does now!

Republicans, to their credit, are starting to push back hard against Democrats' claims that their election integrity bills are designed to prevent minorities from voting.  If that's true, then such efforts have been spectacularly unsuccessful over the last couple of decades, since voter ID measures have proliferated, but minorities have voted at increasingly high levels regardless.

In other news, future House Speaker (?) Kevin McCarthy is saying that he'll boot several Democrats off their committees should Republicans take over the House in January 2023.  That's an understandable reaction to similar purges initiated by the Dems under Nancy Pelosi, but I believe that "tit for tat" is bad policy, in this particular case.  I say the voters get to choose who will represent them in Congress, and if they select incompetent, boneheaded hacks, so be it.  Those hacks should be representing their constituents, not only by voting on legislation but also by serving on committees.  If we continue to follow the logic of stripping certain Congressmen of their rights, it's only a matter of time before controversial members are simply unseated altogether, and then our democracy will look even more threadbare than it already does.

And here's a little food for thought: in 2020, we managed to virtually abolish the phenomenon of rejecting absentee/mail-in ballots because they failed to meet all the criteria established under law.  In other words, EVERY ballot, no matter how flawed, was counted, because most of those ballots (duh!) were bound to be votes for Joe Biden.  Now, though, that the dynamics have shifted, the rejection of mail-in ballots is once again occurring much more often, and in some cases at amazingly high rates.  This should make any sensible person think twice about the legitimacy and fairness of the process in 2020...and today!  The counting of votes ought to be CONSISTENT from one election cycle to the next, after all.