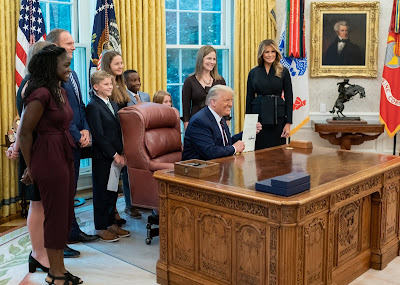 Friends, my latest article is all about why we need Amy Coney Barrett and President Trump both to succeed in October and November.  One without the other puts our country in grave danger.  See if you agree...

Will Ginsburg-Barrett Be a Turning Point for America?

Most political observers understand that the death of Justice Ruth Bader Ginsburg, a reliable “progressive” voice on the Supreme Court, and the nomination of Judge Amy Coney Barrett, seemingly a strong conservative and constitutionalist, to replace her, represents a seminal moment in the history of American jurisprudence. We could be setting up the conditions for many well-established legal doctrines, among them the constitutional right to an abortion, to evaporate in the years ahead. The relentless expansion of federal powers could also be stymied.

Changing the direction of the Court, however, may not be as consequential as it once seemed. That's because all of our political institutions, including SCOTUS, have undergone a steady process of delegitimization in recent years.

Democrats and progressives have long claimed that the existing conservative majority on the Court is anti-democratic, retrograde, and obnoxious. The Left's speculation about court-packing may have accelerated of late, but it's been percolating for years, along with its penchant for impeaching any and all federal officials who stand in its way. Moreover, the electoral college and the Senate are also on the progressive chopping block. And states' rights? They don't stand a chance in the “New Order”.

The sad fact is that Democrats and liberals increasingly foresee a time — and not far in the future, either — when the Republican Party will have sunk beneath the waves of demographic oblivion, and they, the enlightened ones, the paragons of political virtue, the harbingers of enforced equality, will be in a position to push through any change they like.

Hallowed institutions like SCOTUS, in this scenario, if they dare to resist, will be contorted into whatever new shapes the historical moment calls for. The Supreme Court, therefore, in its current sense of a court of last resort that it is meaningfully independent of the executive and legislative branches of government, may not endure more than a few weeks, should Democrats take full control of the White House and Congress in January 2021. Audacious reforms, like abolishing the filibuster and packing SCOTUS, which seemed like plot elements in dystopian fiction not long ago, are now relatively easy to imagine becoming the law of the land.

And this brings us to what could be Amy Coney Barrett's real importance in American history.

Since Democrats seem determined to undermine the current system of separation of powers, or any other political contrivance that stands in the way of their hegemony, securing a temporary conservative majority on the Court, or a larger such majority, fades into insignificance. After all, the Court is just one election away from collapsing in a heap, like every other institution we hold dear.

What will perpetuate this newly fortified conservative majority, then, and maintain our current system of democratic and constitutional government in good health, is not winning the current nomination fight — it is keeping the Democrats out of the White House and denying them a Senate majority. This is what ultimately will determine the fate of our Republic, for, if we empower those who want to “transform” America, by undermining its traditional institutions, we can expect those institutions to be destroyed. Indeed, we will have voted to destroy them.

When Judge Barrett appears before the Judiciary Committee of the Senate in October, therefore, her immediate and most obvious task will be reassure the Senate sufficiently to ensure her confirmation and get her on the Court. Her more fundamental task, however, will be to create the conditions for Republicans to win the 2020 election. For, increasingly, the latter seems a necessary precondition for the former, in the sense that a Democratic President and Congress would soon make mincemeat of the judicial norms that undergird the integrity of SCOTUS itself. Justice Barrett, without President Trump to back her up, would soon find herself spinning her wheels in a “reformed” judicial system whose purpose is to rubber-stamp the dictates of leftist politicians and bureaucrats. She might as well retire the moment she takes up her gavel, for all the good she will do.

What this means, therefore, is that, as the nation teeters on the brink, as the polls tighten, and as both sides await the verdict of the American people in November, everything may hinge on the woman whom fate has made the inevitable centerpiece of our political discourse in the closing weeks of the campaign. Either she will acquit herself well, and both she and Trump will sail to victory, or she will falter, and the executive-judicial axis of conservative constitutionalism that currently stands as a sentinel against leftist overreach will soon collapse.

Make no mistake, winning a Supreme Court seat, but losing the White House and the Senate, is tantamount to winning nothing at all. Barrett must be made to understand these stakes.

Can a 48-year-old mother of seven deliver — can she be the savior our nation needs in this, its moment of peril? I believe she can.

Already she has distracted the Democrats and the Left from following their preferred playbook for the terminal phase of the election campaign. Instead of focusing the attention of the voters on an endless string of invented Trump scandals, now the Democrats face the unenviable prospect of engaging in verbal fisticuffs with an intelligent, courageous conservative woman. Assuming Barrett can stand up to the punishment that the Left will surely inflict, she can and will emerge on the other side of this melee victorious.

In doing so, she will find that she has accomplished far more than merely advancing her judicial career and the narrow cause of originalism. She will have bought America four more years of sane, responsible government. She will have held the fanatical forces of leftism at bay. She may even have planted the seeds for a civil war within the Left that will lastingly disrupt, or even permanently disable, the threat it poses to America itself.

Judge Barrett may well hold the fate of our nation in her hands. Let us hope and pray that she is up to the challenge.

Posted by Nicholas Waddy at 7:58 PM