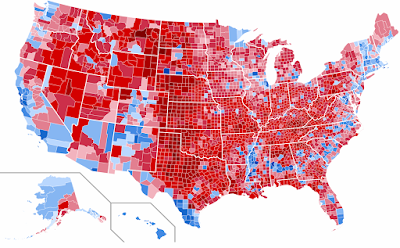 Friends, despite the seemingly decisive win for Trump implied by the map above, the 2016 election was darn close -- too close for comfort, if you ask me.  In the key states of Florida, Pennsylvania, Michigan, and Wisconsin, Trump's margins were razor thin.  By the same token, Hillary's wins in Minnesota, New Hampshire, and Nevada were also very narrow.

My latest article isn't about electoral politics, per se, however.  It's about how the death of RBG brings into clearer focus why those of us who voted for Trump in 2016 did so, and why we were right to do so.  The fate of our country, had Hillary prevailed, would have been bleak indeed.  A liberal-dominated Supreme Court would have twisted the Constitution and the law out of all recognition, and you and I would have been lucky to escape with our lives and our liberty (that is, our ability to remain un-incarcerated).  Certainly the Left would have stacked the deck for all future elections, such that our chances of ever overcoming "progressive" tyranny would have been slim.

See what you think of my analysis, therefore, which appears in Townhall: