The Thin Blue Line Is Taxed In Western New York 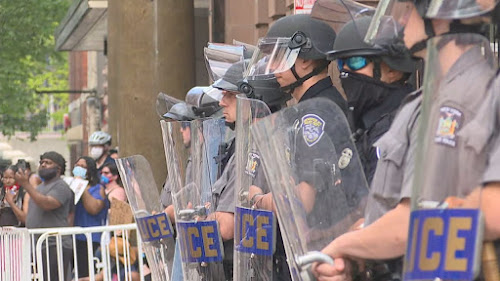 Friends, many of you are well aware that I live in Rochester, New York, close to downtown.  Under ordinary circumstances, it's a fun place to be, because there are so many things to do in the city.  Well, under these circumstances, i.e. during the coronavirus pandemic, it's a lot less fun than it used to be.  That's because "fun", in so many forms, has been cancelled.

What's worse, though, is that Rochester is becoming a hotbed of BLM protests, and violence is depressingly common.  Check out what happened last night on my block!  BLM is becoming more and more brazen all the time.  They feel entitled to harass and threaten ordinary people -- white people -- who are bothering, and oppressing, no one.  Will these tactics backfire?  I sure hope so!  But that will only happen if most Americans know what's happening, and the media is determined to prevent that knowledge from spreading...

In other -- and related -- news, President Trump is striking a blow against left-wing racism by banning classes on "critical race theory" in the federal government.  Now, if only we could sanitize higher ed in the same fashion!

And no, I'm not foolish enough to believe that President Trump really can compel federal bureaucrats to stop demonizing white people...but he can try and, if he's reelected, the racist "anti-racists" might begin to think about finding a new way to make a living.  Sooner or later, a Trumpian federal government will show left-wing radicals the door, if they don't scurry off to Canada on their own.

Posted by Nicholas Waddy at 5:43 PM