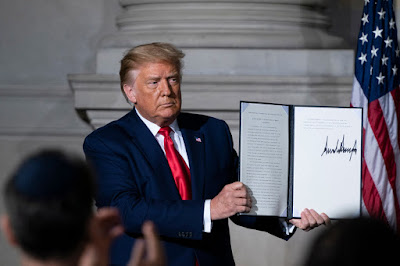 Friends, you wouldn't think that honoring America's Founders and its history of freedom would be a partisan issue, but these days everything is partisan.  C'est la vie.  President Trump is doing his best, however, to defend our country's heritage and good name, and he's therefore hitting back at efforts by the Left to enshrine 1619, and arrival of the first slaves at Jamestown, Virginia, as the seminal moment in America's past.  He's proposed a "1776 Commission" to revive "patriotic education", as opposed to curricula that are designed to vilify America and our traditional heroes.  Lurking beneath all this is a campaign strategy that aims to give voters a binary choice: will they vote for a candidate and a party that loves America, or a candidate and a party that disparages and disdains America?  You would think that would be an easy choice!

In other news, the Department of Education is opening an investigation into Princeton University.  It's a cute maneuver, in point of fact: the ultra-left President of Princeton is on record saying that his institution is racist.  (Well, liberals are on record saying that every institution is racist.)  The problem is that they also claim, in their equal opportunity statements, that they're not racist.  So which is it?  If, indeed, proof exists of racist behavior by colleges and universities, then they could lose federal funding.  This could therefore be a backdoor approach to defunding left-wing higher ed!  Let's explore the possibilities, shall we?

Meanwhile, Chicagoans are dropping like flies.  This year, though, they are being shot in alarming numbers, even by Chicago standards!  This article documents the phenomenon, but it never asks the tough questions: does liberal "criminal justice reform" have anything to do with the light sentences meted out to violent offenders?  Does the castigation of law enforcement have anything to do with the declining effectiveness of policing in the Windy City?  Oh no.  Nothing to see here.  Move along.  Let's just spend more money on "community programs".  In other words, let's enrich the activist class.  That'll do the trick.

Finally, take note of the fact that the Democratic majority on the Pennsylvania Supreme Court is at it again.  Before 2018, they redrew the boundaries of Congressional districts in PA -- to favor Democrats.  Now they're messing with the 2020 election with similar alacrity.  They're extending deadlines for mail-in ballots, and perhaps more importantly they've thrown Howie Hawkins and the Green Party off the ballot altogether.  Excluding the Greens and Kanye West from the ballot is a nationwide Democratic obsession.  The Dems are desperate to keep 2020 as Trump v. Biden, because they know that many "progressives" would appreciate a third choice!  But no -- that can't be allowed in their version of "democracy".

Posted by Nicholas Waddy at 2:27 PM