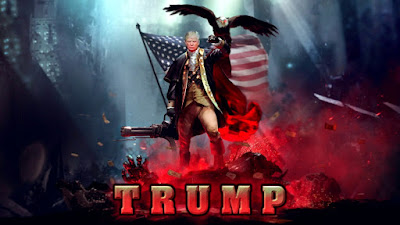 Friends, we always knew Trump was a warrior, and he proved it tonight!  No one could say he lacked for courage, or bombast, in his assault on Biden and the Democrats.  He threw dozens of punches, and in my view he landed plenty.  He also refused to let Biden have a moment's peace.  Was he scrupulously polite and observant of the rules?  Well, no....but he was Trump!  What else can we expect of the man after all these years?

My overall impression of the debate is that it will change remarkably few minds.  For those who find Trump abrasive and arrogant, it will confirm for them that they have always been right.  For those who believe that Biden is confused, corrupt, or evasive, they will find plenty of ammunition in the debate as well.

There were certainly questions that I wish Trump had answered differently or better.  I've always felt that Trump could make a much stronger case on race.  He ought to call out the Dems and the Left for playing the race card endlessly and shamelessly.  He ought to point out the Republicans' superior record on racial justice and equality, compared to the Democrats.  He ought to talk about how left-wing policies have failed people of color time and time again.  But he generally doesn't make these points, and it's a shame.

Trump tried his best to tie Joe Biden to the radical left.  He tried to force Sleepy Joe to choose between moderation and appealing to progressives.  Of course, Joe won't choose.  He'd prefer to triangulate.  He'd prefer to deflect.  In many cases, he'd prefer not to answer at all, as on questions about court-packing and who he might nominate to SCOTUS.  Biden has gotten away with a lot.  At least, when Trump is in the room, Biden gets called on his sophistry and his sly machinations.

In the end, those who expected Biden to fall flat on his face in the first debate were disappointed.  The Biden campaign will be alive and well after this tumultuous tête-à-tête. Probably the polls won't shift much in either direction.

The ball, in my view, is now clearly in Amy Coney Barrett's court, and in that of the Senate Democrats who must decide how aggressively to oppose and criticize her.  I suspect that will be the deciding factor in November.

There is one chance that the debate could fundamentally alter the race, however.  Trump stridently pursued the issue of Hunter Biden's dirty dealings with a variety of foreign actors, in Ukraine, Russia, and China.  The media has been utterly silent on that narrative for many months now.  Can they continue to ignore the story, when Biden is advancing the transparently false claim that Hunter never took any money from anyone?  We shall see.

Plus, Trump made it clear that the drama won't end on Nov. 3rd.  He expects a "rigged election", and that means that this knock-down-drag-out fight may not be over until Jan. 20th.  And even that may be optimistic!  Just sayin'...

Here's an independent analysis of the debate, with which I would mostly agree:

It's true that Biden faced a very low bar in terms of expectations.  He cleared it.

And another analysis -- this one way more Trump-friendly:

And, in other news, there's a suspect in the attempted murder of two Sheriff's Deputies in Los Angeles County.  If the suspect were a white supremacist, you better believe the media would be all over it.  Unfortunately, he's a person of color and a gangbanger -- so, in other words, just the type of violent criminal that the media stridently asserts doesn't exist.  Expect a total press blackout, therefore.