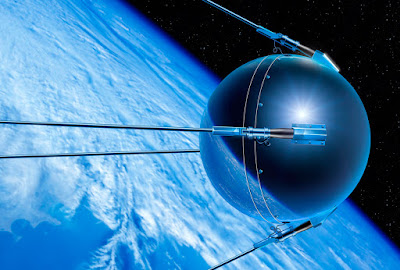 What's that sound, you ask?  It's the insistent screeching of the Soviet Union's trailblazing satellite: Sputnik 1.  Less metaphorically, it's the sound of ME, as I'm extensively quoted in an outstanding Sputnik News Agency article about the Black Lives Matter movement.  Take a gander at what I had to say about BLM and its prospects in the post-election period:

In other news, President Trump, as expected, has named Amy Coney Barrett as his nominee to fill the vacant seat on the Supreme Court.  The consensus is that she'll be a solid conservative, and she'll be very hard to beat in terms of the nomination fight.  The Dems are struggling to find narratives that they can deploy against her...but how hard they try to tarnish her good name remains to be seen.  The upshot: SCOTUS is about to get measurably greater, better, and more faithful to the Constitution.

Finally, President Trump recently made a stop in Virginia, and it has me wondering whether that state could be in play in November.  Democrats are inclined to scoff -- almost as much as they scoffed at the idea that Trump could win in Wisconsin, Michigan, or Pennsylvania in 2016...  Personally, I say we should play on as big a map as possible.  Win 'em all, Mr. President!  The momentum is moving in our direction, and this nomination struggle, combined with the upcoming debates, means the dynamics are growing more favorable by the day.  I'm optimistic!

Posted by Nicholas Waddy at 6:11 PM