President Pelosi??? Just When You Thought Things Couldn't Get Any Worse 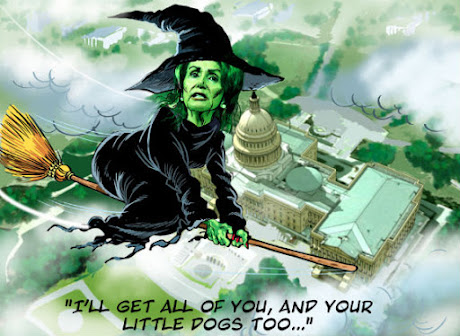 Friends, President Trump painted a sobering picture on the first night of the RNC: of a Democratic Party determined to win in 2020 at all costs, and willing to play fast and loose with electoral norms and democratic values to do so.  Check out this article, which forecasts some of the confusion and gamesmanship that could follow in the days and weeks after Election Day, November 3rd.
https://www.realclearpolitics.com/articles/2020/08/25/mail-in_ballots_what_could_go_wrong_144045.html
While it's not especially likely that the electoral college will be stymied as late as January 20th, 2021, and thus Nancy Pelosi might make a play for the Oval Office, let's be honest: stranger things have happened!
Now, couple that analysis you just read with recent statements from Hillary Clinton:
https://news.yahoo.com/hillary-clinton-urges-biden-not-135350203.html
Don't concede under ANY circumstances?  What does that tell you?  It suggests to me that the Dems are playing a long game.  They don't expect to win on election night.  They expect the counting to go on and on...and they expect that protracted struggle to work to their advantage.  They expect innumerable court challenges, and presumably they expect to win many of them, perhaps because they assume that even many "Republican" judges will jump at the chance to rid the country of President Trump.  In all these assumptions they may be correct.
Bottom line: it will take extraordinary vigilance on our part, as conservatives and as patriots, to ensure that the Dems don't game the system in 2020.  We also have to face the reality that there's a good chance that the election won't produce a CLEAR, undisputed winner...and then what?  The Left and the media will try to bully Trump out of office, under those conditions.  Undoubtedly street violence will be part of their playbook.  How will Trump respond?  How should Trump respond?  I know many of you will eagerly reply, "Declare martial law!  Arrest the troublemakers!"  Realistically, though, we have to anticipate that any effort by President Trump to enforce public order, in the wake of a disputed election, will be seen by the Left -- and its journalistic acolytes -- as fascism run amok.  In any case, we need to start imaging the various horrific turns this election season could take, and we need to prepare to safeguard whatever tatters of democracy are left to us after November 3rd.
Posted by Nicholas Waddy at 1:42 PM