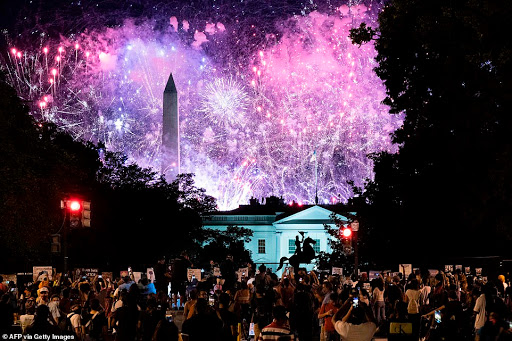 Friends, the RNC is now in the books, and it's time to reflect on what we've seen.

First, I give both Vice-President Pence and President Trump high marks for their speeches.  They delivered a lot of crisp, hard-hitting verbal salvos that are sure to land squarely on the Democrats and Joe Biden.  Frankly, neither man presented his ideas in what might be described as a "pithy" fashion.  Both made an expansive case for the GOP, and against the Democrats, instead.  That's okay.  Political speeches tend to be meandering, and both men had a lot of issues to cover and interest groups to placate.  The use of personal anecdotes to encapsulate larger themes is now a tried-and-true practice in American political rhetoric.  They used these anecdotes, usually supported by the presence of guests in the audience, to good effect.  I have no doubt that, overall, a great many Republicans and independents will be fortified in their resolve and/or won over because of what they saw and heard this week.  This is especially true given that, the mainstream media being what it is, much of the time the Republican message isn't even accessible to many voters.

If I had to fault the RNC and the Vice-President and President for anything, it would be the sheer breadth of their message(s).  The voters do like simplicity, and it seems to me that so many issues are in play in 2020 that it could be hard for Trump voters to boil down, for their neighbors, just why they're voting red.  Is it law and order?  Is it China?  Is it socialism?  Is it "cancel culture" and liberal intolerance?  Of course, it can and should be all of these things, but we need to be able to abbreviate our pitch into a slogan, or at least a number of bullet points.  That's a work in progress.

I have to say, I missed many of the secondary speakers, but I saw quite a few on night three, and many of them were outstanding.  How many undecided voters were watching?  A lot, I hope!  It strikes me that, for a party beholden to "white supremacists", the RNC featured a ton of minority and women speakers, and it made a herculean effort to overcome the notion that Republicans are "racist" and "sexist".  To Trump's credit, from day one he has reached out to black voters -- sorry, "Black" voters -- and with some success.  Polls consistently show that, while Trump's support in the black community is not vast, he can easily exceed the 8% of the black vote that he received in 2016.  This has to make Democrats nervous.  In fact, Trump looks set to expand his percentage of the black, Hispanic, and Asian vote.  Is it any wonder, then, that Democrats are playing the "race card" as if their political lives depended on it?  No.  They will try everything they can think of to try to shore up their minority support.  Now, it's not inconceivable that Trump could lose in 2020 simply by getting a smaller majority among white voters.  Be that as it may, step one to victory for the Trump-Pence ticket, it seems to me, is to convince as many people of color as possible to vote for Trump, and, if that fails, convince as many of them as possible NOT to vote for Biden.  Kanye, anyone?

Lastly, I think we ought to reflect on the fact that the Biden-Harris ticket got no discernible polling bounce whatsoever from the DNC last week.  Interesting.  For my money, that means that the Dems have hit their ceiling.  Enthusiasm for Biden isn't likely to surge any further.  It can, however, and probably will, diminish.  This is, despite what the media tells us, a very evenly divided country, politically speaking.  That means that Trump can win.  It also means that Biden can win.  It certainly means that neither candidate is likely to win in a landslide.

And that means, as we've noted before, that our election will probably be contested.  Ergo, everything that's happened at these conventions, and all the votes that Americans will cast in September, October, and November, may ultimately come to nought.  That's because the election may well be decided by the Supreme Court, by gamesmanship, by skullduggery, by will (or the lack thereof), by public protests, or even by force.  None of us prefers a messy victory to a clean one, naturally.  But we may have little choice.  Circumstances this year are just not conducive to a "normal" political process.

Posted by Nicholas Waddy at 4:54 PM