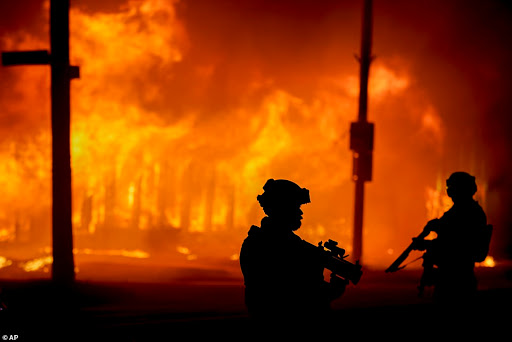 Friends, the news is full to the brim with fascinating stories these days.  For one thing, the tide seems to be turning on the issue of riots.  Even the Dems are starting to notice them!  And disapprove!  The wonders never cease.  Of course, their calls for law and order ring massively hollow, given the fact that they've excused a seemingly endless cascade of unrest for months.  But hey, even leftists can read the polls.  They're running scared now.

One reason the tide is turning is because leftist violence is getting harder and harder to obfuscate, and harder and harder to blame on shadowy white supremacists and/or Trump.  This profile of the "model citizen" who appears to have shot a right-wing counter-protestor in Portland is worth a read.  The venomous hate that's being spewed on the Left can really be startling at times, and note that it's not a black man, infused with BLM fervor, who pulled the trigger.  It's an unstable white guy with a crush on Antifa.  This shouldn't shock us.  The most unhinged anti-fascists and anti-racists are often those who have no personal experience with either fascism or racism.  They learned to hate in Ethnic Studies 101, or maybe they were just born that way?

In other news, according to this riveting account from the New York Post, mail-in voter fraud isn't a fantasy of the right.  It happens, and on a scale that can swing elections one way or the other.  The mechanics of it are most interesting, and one has to wonder how widespread these tactics are.

The NFL is apparently clarifying the degree to which it will knuckle under to BLM.  The answer: a lot!  Allowing players and teams to display political messages is, if you ask me, a pretty bad idea.  I mean, we don't watch football for political enlightenment, do we?  And yet, it would be one thing if the teams and players were allowed to promote the causes of their choice, but naturally they aren't.  Only approved messages will be seen, and the only messages that are approved are BLM-friendly.  One wonders whether anthem-kneeling will be obligatory?  Why not skip the national anthem, I say, and just sing the Internationale instead.  It's a catchy tune.

So, we all know that good news about the coronavirus is NO NEWS, because only bad news fits the master narrative that America is coming apart at the seams, and it's all Trump's fault.  Well, there IS good news about the virus.  Cases and hospitalizations are down, even in the "hot spots," and we should get set for a massive decline in daily deaths, because it's on the horizon.  You better believe the media will find a way of spinning the pandemic into an accelerating cataclysm, however.  What else have they got?  It's either that, or pull another Trump scandal out of a hat.  Better yet, do both, and then throw in some rioting, just for good measure.

Lastly, this is a very interesting and potentially critical analysis.  I've been thinking along the same lines: that Trump would be sitting pretty on election night, and then the Dems would dig in their heels and try to count their way to a come-from-behind victory.  The dynamics would be fascinating -- politically, legally, journalistically.  When, for example, does Trump declare victory???

Posted by Nicholas Waddy at 8:07 PM